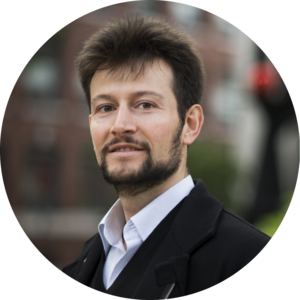 I received a BS from MIT in 2004 and then pursued doctoral research in the Botstein laboratory at Princeton University, aiming to understand how cells coordinate their growth, gene expression, and metabolism. As a postdoc in the van Oudenaarden laboratory at MIT, I characterized trade-offs of aerobic glycolysis (also known as Warburg effect) and obtained direct evidence for differential stoichiometry among core ribosomal proteins, suggesting that specialized ribosomes regulate protein synthesis.

My laboratory (slavovlab.net) aims to understand the rules governing emergent systems-level behavior and to use these rules to rationally engineer biological systems. We make quantitative measurements, often at the single-cell level, to test different conceptual frameworks and discriminate among different classes of models.
Areas of focus include:
• Ribosome mediated translational regulation: Mechanisms by which ribosomal modifications regulate protein synthesis
• Single-cell protein analysis: We develop and apply mass-spectrometry methods that allow analyzing thousands of proteins in single cells. These data have enabled characterizing post-transcriptional regulation in single cells at systems level, as well as discovering macrophage polarization in the absence of polarizing cytokines.