Now is the time to move open-source hardware development into basic research labs.

Having convinced airport security to haul a suspicious looking briefcase packed with hardware on board, Pete Pitrone, an imaging specialist in the group of Pavel Tomancak, headed for South Africa. His aim was to introduce young students to the parts, many manufactured at his own institute, in the hope they would assemble them into a sophisticated working microscope. It was a symbolic step to demonstrate the potential for building new tools in laboratories and beyond. 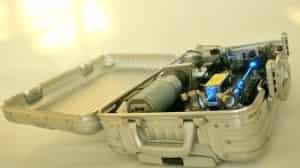 Manufacturing has gained an appealing image of late. In his State of the Union Address in February, US president Barack Obama announced the creation of three manufacturing hubs modeled after an institute in Youngstown, Ohio. His comments referenced the ability to innovate quickly with additive manufacturing, which relies on digital design and 3D printing: relatively recent improvements which have changed the way that physical objects and devices are made, and helped to open up the design process.

Taking advantage of these developments at the grassroots level is an enthusiastic crop of do-it-yourself ‘builders’ or ‘hackers’ who are promoting a culture of shared design and open innovation, and have spawned a movement towards open-source hardware. Analogous to open-source software, open-source hardware licenses prevent the patenting of hardware designs or physical objects, and require comprehensive and freely accessible design and instructions to allow anyone to build the same device. One working definition and a helpful list of considerations is provided by the Open Source Hardware Association.

The advent of cheap 3D printers such as the RepRap and MakerBot have made it easy, cheap and relatively fast to turn digital designs into objects. 3D printing involves the layered deposition of a heated polymer through a precisely positioned moving extruder. Open-source electronics that can be used to control hardware with software from the likes of Arduino and Raspberry Pi are also making it easier to manufacture sophisticated devices.

In our July editorial, we argue that basic research shares the values of openness and reproducibility embodied by open-source hardware. Beyond making research tools easier and cheaper to build and replicate, developing devices in an open-source environment can actually speed innovation by encouraging community feedback early in development. This can make the work that goes into extensive documentation and robustness testing worthwhile for the individual research group.

Open-source differs from traditional design in its focus:

Many in the design field have said that this focus actually improves designs and promotes the broadest uptake.

Applied technologies like photovoltaics and hardware infrastructure for cloud computing are investing in open-source approaches, but there are currently very few examples of open-source hardware in basic research. OpenPCR publishes the designs for a thermal cycler to conduct PCR, which can be purchased as an inexpensive kit and assembled by hand. Some labs simply use 3D printing to generate teaching models and basic equipment like test tube racks (e.g. the DeRisi lab). 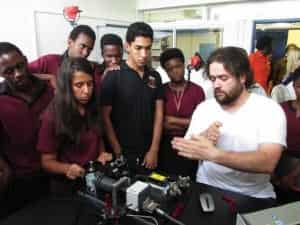 The July issue of Nature Methods includes two leading examples of academic efforts in this direction, OpenSpim and OpenSpinMicroscopy, that include detailed designs for light-sheet microscopes that can take 3D movies of living things. Parts for the OpenSPIM scope were hiding in the briefcase en route to an EMBO course organized by Musa Mhlanga along with Freddy Frischknecht and Jost Enninga in Pretoria. A highlight according to Pavel Tomancak was to watch talented high school students assemble and successfully operate the scope in under two hours. The availability of design details and the focus on making it possible to build are a model of accessibility that has ramifications in teaching and outreach, encouraging many others to play around with the hardware.

Hardware innovation is a critical part of the technological advances that drive science. To carry out experiments, many research laboratories need tools that are simply not available, cost too much or will take too long to develop commercially. An open-source approach can lower the barriers to adopting, disseminating and ultimately improving tools for research.