+1
KUOK YAP and 1 other See all
PhD candidate, The University of Queensland
Follow

PhD candidate, The University of Queensland 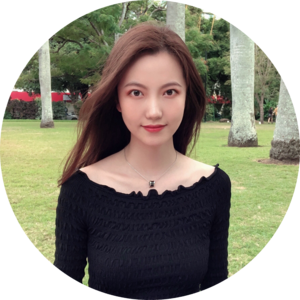 Honours Student, The University of Queensland

In the 1960s, Dr. Lorents Gran, a red cross physician working in Africa documented that a medicinal tea can be made by boiling the Oldenlandia affinis plant. This treatment was commonly used by African women to aid childbirth. Dr. Gran speculated that mini-proteins or peptides, one of which was named kalata B1, were responsible for the medicinal properties of the tea but what class of peptides were resistant to high temperatures such as boiling water? This question remained a mystery until 1995 when Professor David Craik and his collaborators solved the structure of kalata B1. It was determined that kalata B1 had a cyclized backbone, connected by a knot of three disulfide-bonds which was contradictory to the understanding of peptide biology at that time. This catalyzed a frenzy of research in discovering additional members of this class of peptides which was termed cyclotides. A new field of research was established and researchers are now exploiting the exceptional stability of these cyclic disulfide-rich peptides for a range of applications in agriculture and in drug design and development.

Cyclic peptides were found naturally in plants, bacteria, and animals, and others have been synthetically engineered to be cyclic. However, majority of peptides, including cyclic disulfide-rich peptides, are produced using solid phase peptide synthesis which generates substantial amounts of hazardous solvent waste such as N,N-dimethylformamide (DMF), piperidine, and dichloromethane (DMF). With increasing environmental awareness by governments and the general public, a more environmentally sustainable or ‘greener’ bioproduction method for these drug modalities is highly desired.

In line with the definition of green chemistry which is “the design of chemical products and processes that reduce or eliminate the use and generation of hazardous substances”, we strived to establish a cyclic peptide bioproduction system based on recombinant systems. The main criteria for the platform was that it had to be environmentally sustainable and through recombinant systems, we eliminate the use and generation of hazardous reagents and solvents. Several other criteria were also prioritized during the development of our platform, which were versatility, correct folding, simple downstream purification, relatively inexpensive, high yields, and efficient enzymatic cyclization of linear precursor peptides to unlock desired stability. 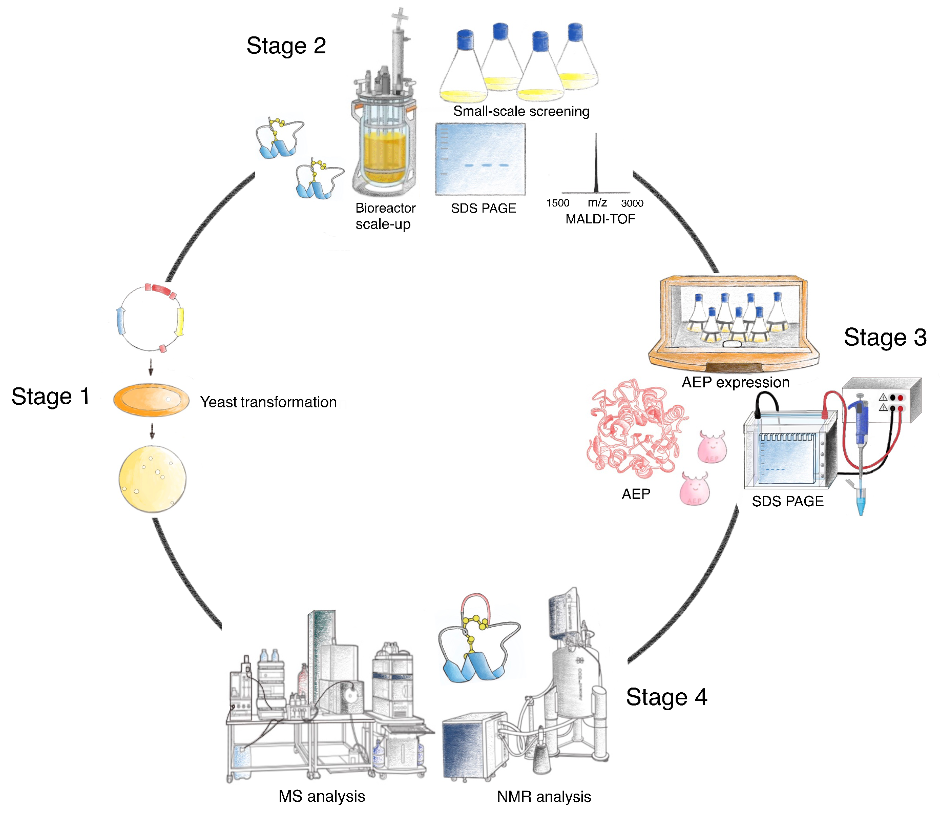 Figure 1. Overview of the production platform. Stage 1: Gene encoding desired cyclic peptides are integrated into expression vectors. These vectors are then transformed into yeast cells. In stage 2, small-scale expression optimization of linear precursor peptides is carried out and successful colonies are selected for scale-up production in fermenters. Stage 3 depicts the production of a protein ligase, in this case, an asparaginyl endopeptidase (AEP). Stage 4 illustrates the in-vitro formation of matured cyclic peptides when linear peptide precursors from stage 2 are combined with AEP from stage 3. Mass spectrometry (MS) and nuclear magnetic resonance (NMR) analysis were carried out to validate the recombinantly produced cyclic peptides. (Image courtesy of Yan Zhou)

We selected a yeast-based expression system where correctly folded linear precursor peptides were expressed and secreted into the growth media for ease of purification. After a single-step affinity purification, fractions enriched with linear peptide precursors were then matured into the cyclic form in-vitro with a recombinantly produced protein ligase, called AEP. To demonstrate the versatility of the platform, three structurally distinct cyclic peptides from different origins were generated: a kallikrein-related peptidase 5 inhibitor based on the sunflower trypsin inhibitor-1 scaffold with a single disulfide bond from the sunflower plant; a potent conotoxin which was engineered cyclic with two disulfide bonds from the cone snail, Conus victoriae; and the most grafted cyclotide for scaffolding and engineering applications, MCoTI-II from the Vietnamese gấc. These recombinantly produced peptides were structurally and functionally validated and were equivalent to their synthetic counterparts. To date and to the best of our knowledge, this protocol achieved yields of two-three orders of magnitude higher than other recombinant attempts reported in literature. 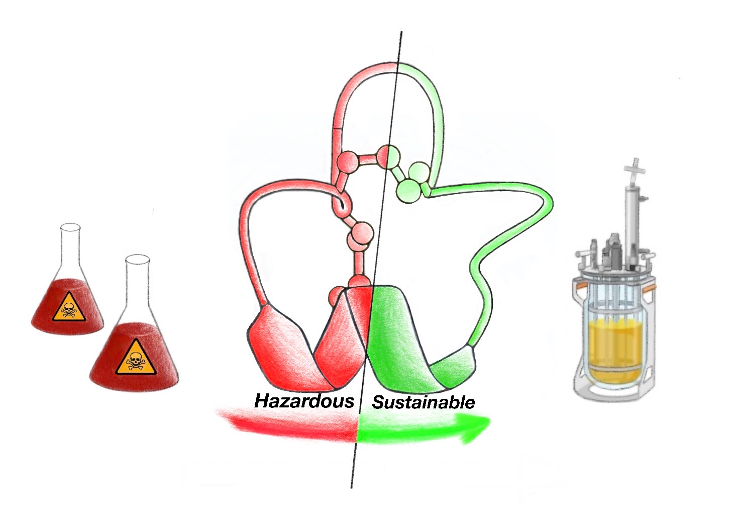 We hope this protocol will spark a paradigm shift within the community to move toward greener and more sustainable processes as illustrated in Figure 2. Also, we hope that our designed platform will be helpful in providing a viable alternative for the production of cyclic disulfide-rich peptides for research or manufacturing applications.

PhD candidate, The University of Queensland