A comprehensive assessment of motor function and skeletal muscle development in neonatal mice provides insight into the structural status of the neuromuscular system during motor development.
Dan Zhu
Professor, Huazhong University of Science and Technology
Follow
Like Liked by Evelina Satkevic and 1 other
0

Motor development is one of the most notable features after birth. Human infants gradually become able to lift their heads, crawl, stand, and walk during postnatal development. These performances are concluded and serve as the basis of the most standardized assessment tool. The tool provides the clinician and parents with a structured method of observing the infant’s progress and helps define a developmental delay.

Motor development is heterochronic and proceeds from cephalic to caudal, i.e., arm movement always comes before leg movement. Structural integrity dictates normal function. The maturation of motor function depends on the structural development of the neuromuscular system in skeletal muscle. However, based on the current knowledge, it is unclear whether structural development is heterochronic in developing muscles from different body parts, resulting in the inability to correspond to functional outcomes.

In most experimental studies, mice are the most widely used mode animals for human infants to investigate the structural features of the neuromuscular system because of their immaturity at birth and slow ontogenic processes of the nervous system after birth. On the one hand, for the structural development of skeletal muscle itself, there is no clear consensus on whether there is myofiber hyperplasia, i.e., an increase in myofiber number, during postnatal development. This controversy over myofiber hyperplasia confuses the understanding of structural development in postnatal muscles. On the other hand, neuromuscular junction (NMJ) is a chemical synapse between neurons and myofibers, and its development is essential to improving muscle function. Most investigations have focused on developing NMJs’ morphological changes in the longitudinal muscle sections, isolated myofibers, or flat muscles using traditional histological methods. However, the distribution of NMJs in skeletal muscle was uneven, and each muscle has a unique spatial distribution characteristic closely associated with motor functioning. Limited muscle selection and the lack of information on the spatial distribution of NMJs easily result in a biased appraisal of the NMJ development.

In recent twenty years, tissue optical clearing techniques have provided novel perspectives for 3D imaging of large-volume tissues and even entire organisms by introducing chemical agents to overcome light scattering of biological tissues. Tissue optical clearing and advanced optical imaging techniques make whole-mount imaging and analyses of NMJs in entire skeletal muscles possible. Dan Zhu’s group has been developing and applying optical clearing techniques for 3D imaging in vivo and ex vivo. In 2019, collaborating with Jiang’s group from Peking University People Hospital, we first established a 3D imaging method for obtaining spatial distributions of all NMJs in entire skeletal muscles using optical clearing in conjunction with advanced labeling and optical imaging. And whole mount analysis of NMJs demonstrated the adaptive changes in NMJs after muscle denervation and reinnervation. Furthermore, combined with the FDISCO method (a clearing method with superior fluorescence preservation), the intramuscular nerve branches and NMJs were visualized simultaneously, which helped to facilitate our understanding of the innervation pattern of the nerve. In recent years, whole mount imaging and analysis of NMJ morphology, number, and distribution have been frequently used in experimental paradigms, which provides new references for NMJ structure research.

Subsequently, we scrutinized the structural development of intramuscular nerves and myofibers in the cervical, forelimb, and hindlimb muscles during motor development. For muscle development, we analyzed the percentages of myofibers with central myonuclei, percentages of proliferative cells, and myofiber numbers in developing muscles at different times quantitatively. We found that myofiber hyperplasia of forelimb and hindlimb muscles was continued until around P3 and P6, while that of cervical muscle ended at birth. For neural development, we examined the 3D structural features of the nerves and NMJs in different muscles by combining the FDISCO method and light-sheet microscopy while detecting mRNA expression of collagen XXV related to axonal arborization using qRT-PCR. The results revealed continued axonal arborization and neuromuscular junction formation of forelimb and hindlimb muscles until around P3 and P9; feature alterations of the cervical muscle ended at birth.

The above results demonstrate that the structural development of the neuromuscular system in mouse skeletal muscles is heterochronic. And structural heterochrony of muscles in different body parts corresponds to their motor function. Moreover, the improvement in motor function after birth is closely associated with increased NMJ and myofiber numbers in skeletal muscles, which correlates structural data with functional performance. In addition, it is first demonstrated that NMJ formation still occurs in mouse skeletal muscle after birth, which will boost future investigations on synaptic development.

The co-first authors of this work are Dr. Jianyi Xu and Dr. Jingtan Zhu. The work is co-corresponding authored by Dr. Dan Zhu (dawnzh@mail.hust.edu.cn) and Dr. Tingting Yu (yutingting@hust.edu.cn). Other authors include Yusha Li, Yingtao Yao, Ang Xuan, and Dongyu Li from HUST. You can find the full paper here: https://www.nature.com/articles/s42003-022-04159-1. 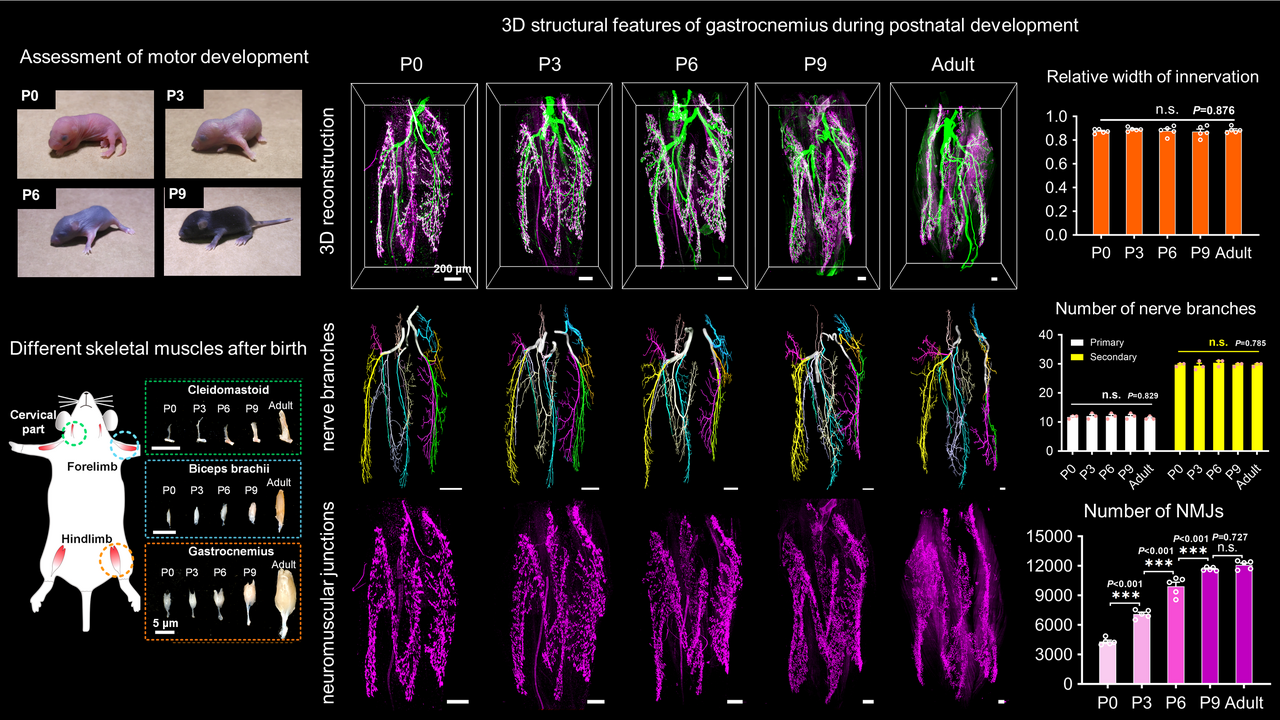