NAD+ is one of the noncanonical nucleotides recently found to cap the 5′ end of RNAs. This Protocol Extension describes procedures for genome-wide analysis of NAD+-capped RNAs by direct RNA sequencing on an Oxford Nanopore platform.

Abstract
Some prokaryotic and eukaryotic RNAs have recently been found to contain the NAD moiety as the cap. We describe a method termed NAD tagSeq for transcriptome-wide identification and quantification of NAD-capped RNAs (NAD-RNAs). In this method, NAD-RNAs are labeled with a synthetic RNA and identified by direct RNA sequencing using Oxford nanopore sequencing technology.

It had long been known that eukaryotic mRNAs generally contain a cap termed m7G cap whereas prokaryotic RNAs do not have the cap. Ten years ago, it was reported that some RNAs in E. coli contain a NAD moiety as the cap. Later, eukaryotic organisms were also found to produce NAD-capped RNAs (NAD-RNAs). These findings indicate a novel mechanism in gene regulation using NAD capping.

We recently developed a method termed NAD tagSeq for transcriptome-wide analysis of NAD-RNAs. This method is based on another method termed NAD CaptureSeq which uses an ADPR cyclase (ADPRC) to replace nicotinamide of NAD with an alkyne followed by copper-catalyzed alkyne-azide cycloaddition (CuAAC) to label NAD-RNAs with biotin. However, in NAD tagSeq, NAD-RNAs are ligated with a synthetic RNAs as a tag, instead of biotin, by using the ADPRC-catalyzed reaction and CuAAC. After tagging, NAD-RNAs are identified by the presence of the RNA tag, through direct RNA sequencing using Oxford nanopore sequencing technology (Figure 1) (https://www.nature.com/articles/s41596-020-0363-z).

NAD tagSeq provides a new method for analyzing NAD+-capped RNAs. The RNA tag serves as a barcode to discriminate the NAD- RNAs from non-NAD-RNAs. NAD tagSeq does not involve PCR amplification which might cause some bias or tedious cDNA library construction and is therefore simpler than NAD captureSeq. NAD tagSeq enables visualization of the overall NAD-RNA structure. The NAD tagSeq method also allow simultaneous measurement of abundance of both NAD-RNAs and non-NAD-RNAs from the same genes.

We believe that NAD tagSeq can be used in identifying and characterizing NAD-RNAs in various organisms. The published protocol of NAD tagSeq describes the detailed procedure that could be followed by other researchers. The availability of the method can facilitate further study to understand functions of NAD-RNAs. 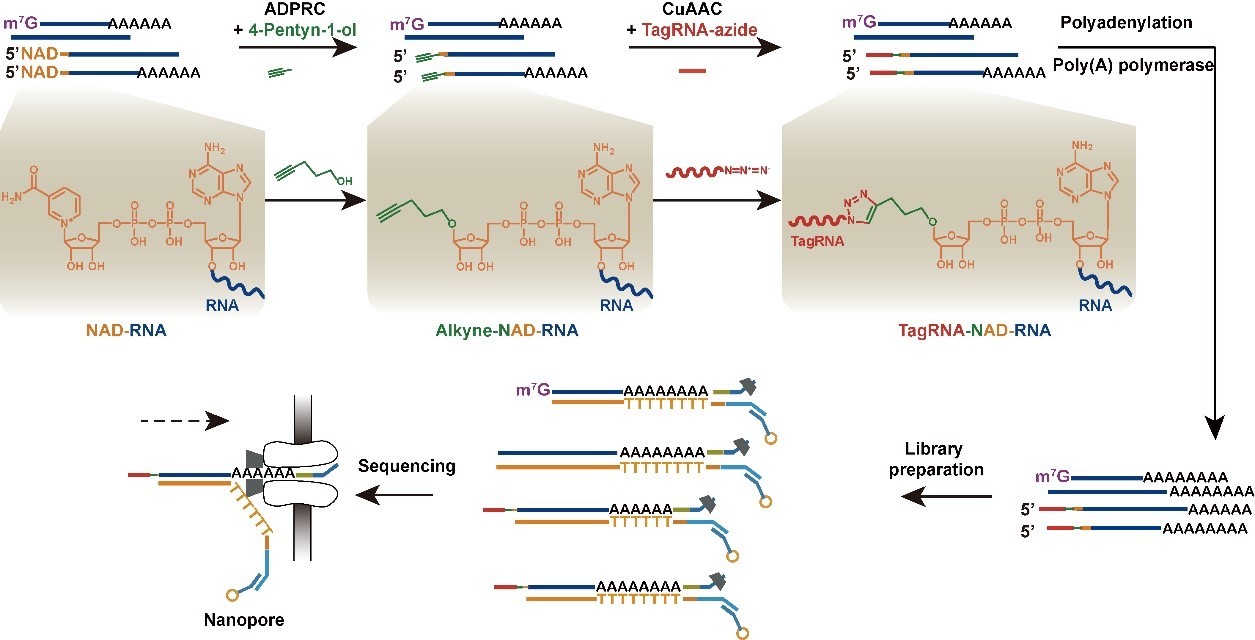 Development of NAD tagSeq for genome-wide identification and characterization of NAD+-capped RNAs.