Human pluripotent stem cell aggregates are formed, embedded in Matrigel and directed to differentiate to heart-forming organoids by the chemical WNT pathway modulators CHIR99021 and IWP2.

Over the last decade, scientists have discovered how to initiate the self-organization and differentiation of pluripotent stem cells (PSCs) and adult stem cells into so-called “organoids”, which resemble native tissues regarding their cellular composition and functionality. In 2015, when I, Lika, started my master thesis in the lab of Dr. Robert Zweigerdt at the Leibniz Research Laboratories for Biotechnology and Artificial Organs (LEBAO), Hannover Medical School (MHH), this research field had already been very popular. And although by that time, organoids had been derived for a broad range of tissues, advances in the cardiovascular field had been limited. Indeed, no cardiac organoid model developing by self-organization of PSCs had been published. Instead, researches aimed at mimicking human adult-like heart tissue by mixing pre-differentiated or primary cardiac cell types.

Therefore, as a side project of my master thesis, Robert asked me to put some cardiac progenitor cells derived from hPSCs into Matrigel, which is typically used to derive other organoid types, and to see what happens. The aim was clearly defined: “Make a ‘real’ cardiac organoid”. After trying different Matrigel embedding methods and time points, different culture platforms, culture medium volumes, and cell numbers for hPSC aggregation, I finally ended up with applying our standard cardiac differentiation protocol1 to Matrigel-embedded hPSC aggregates. I still remember how excited I was when I saw the typical green ring-like pattern of the resulting organoids (I used an NKX2.5-eGFP reporter cell line2 to monitor cardiomyocytes) for the first time – I had applied these culture conditions to only two aggregates and both showed these green rings in the end. Since this pattern looked interesting to me, I repeated the experiment with 36 aggregates at the start of my PhD. Surprise! All 36 differentiated into organoids with green rings. This was the beginning of a long journey full of surprises.

So, I had developed a robust protocol to grow – something. We had no idea what these structures were exactly representing. After performing thousands of immunofluorescence stainings combined with other characterizations hoping that I had grown mini hearts, I realized that these organoids were definitely not what we had planned or expected. They contained many different cell types such as endoderm, which we had not expected to be part of a cardiac organoid. Due to these new and unexpected findings, people around me were skeptical. I remember the reaction of one of my colleagues when I told her that I found endoderm in my cardiac organoids. She said: “But doesn’t it mean that the organoid is useless?” Well, just because something does not work out as planned, it does not mean it is useless. From that time, I learned some important lessons: Be unbiased – if you get unexpected results, make the best out of it. And most importantly: Never give up and do not lose hope. Thankfully, despite all the skepticism and critical comments about my project, Robert always supported and motivated me.

After constantly developing (and discarding) new hypotheses, we found out that our organoid model was by no means useless but showed close morphological similarities to the early embryonic heart and foregut region. However, publishing this interesting finding was not that easy. In the meantime, in 2019, many studies using the term “cardiac organoids” had been published. We noticed that – to stand out with our study – tiny things such as the name of our organoids became important to better explain our scientific story to editors. We had different ideas such as “heart development organoid, HDO” or more complicated names such as “cardiac development micro-entity, CDME” until we decided to go with “heart-forming organoid, HFO” in analogy to the “heart-forming region” in the embryo. At that time, technicians and PhD students from our lab joined the HFO project. Especially my colleague Santoshi was a great help and we finally managed to publish our work in Nature Biotechnology³. Link to full text article: Human heart-forming organoids recapitulate early heart and foregut development

At this point, Lika and me (Santoshi), joined hands to further develop the HFO model towards a screening platform. We established a flow cytometry panel in a 96-well plate format. In the past, Lika lost a substantial number of cells during the dissociation and staining process; therefore, it was necessary to pool 2 to 3 organoids for enabling one staining for flow cytometry analysis. This substantially limited the characterization, because only 32 data points could be generated from a 96-well plate (i.e., if 3 organoids were used as one data point). Consequently, I optimized the protocol such that we could generate 96 data points from the 96-well plate, thereby drastically facilitating quantitative characterization of the organoids. Not only did it enable novel screening approaches in higher throughput, but it also contributed to easier handling and importantly to reducing plastic wares used throughout the experiment.

During this time, I became more involved in generating HFOs with Lika’s protocol; however, I found it very tricky to perform media changes on some critical early stages. I would regularly damage the Matrigel droplet or accidentally take up the organoid in the pipet tip. Thus, Lika and I thoroughly analyzed all the steps trying to figure out a better work around for facilitating the medium exchange. During one of our weekly team meetings we discussed this issue in depth. This is when our colleague Dr. Felix Manstein came up with the idea that I should stack different bore size pipet tips (as shown in the GIF) together, such that we don’t damage the Matrigel droplet while we could still do a fast and efficient medium exchange. This showed us how important it is to communicate our failures to the team, so that we can come up with useful solutions and enjoy the positive spirit of teamwork.

Since I, Robert, performed my PhD thesis in developmental biology, our work on the HFO model was connecting me “back to my scientific roots”. In the recent decade, my lab has made great progress on the mass production of hPSCs and their functional progenies, ultimately aiming at their use for treating patients in need for organ repair1,4,5. Along this process, we noted the challenges behind generating one specific cell type such as pure cardiomyocytes; apparently, in native development, no isolated differentiation of individual lineages occurs6. Therefore, our research on HFOs represents an existing interphase between investigating basic mechanisms of development on the one hand and advancing strategies for directed lineage differentiation on the other hand. Given the multifaceted hurdles that Lika, Santoshi and the other project-supporting group members were facing in getting the project done makes me extremely proud of their achievements!

This team effort strongly supported successful publishing in Nature Protocols7. We truly hope that our work can be reproduced by researchers around the world, and thus contribute to a better understanding of early human heart development and inspire novel, unexpected research ideas and results. Link to full text article: Generation of heart-forming organoids from human pluripotent stem cells 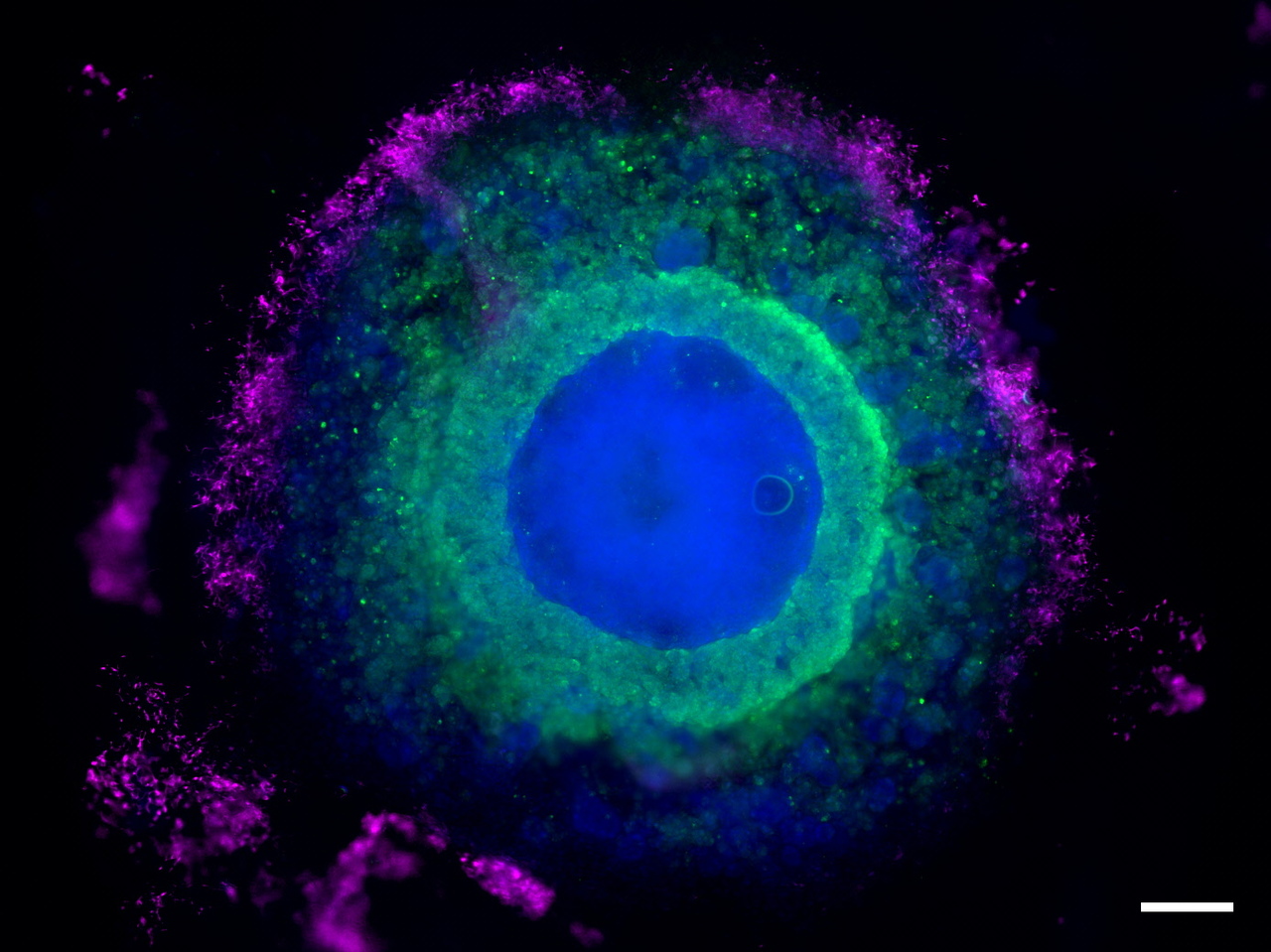