Our protocol paper details the techniques and resources that we have used to successfully culture ctenophores in the lab.
William E. Browne and Jason S Presnell
2 contributors
Like Liked by Evelina Satkevic and 1 other
0

Ctenophores (pronounced 'te-nǝ-fȯr' or 'tē-nǝ-fȯr'), also called comb jellies, are gelatinous invertebrates found in all the world’s oceans, from shallow coastal estuaries to the deep sea. Unlike “true” jellyfish (i.e. members of Scyphozoa in the phylum Cnidaria), ctenophores comprise their own phylum, Ctenophora, named after a unique structure not found in any other animal – giant, fused cilia called ctenes. Typically these ctenes are arranged into 8 longitudinal rows of prominent paddle-like structures around the ctenophore’s body and are used for locomotion in most species. Ctenes are good at refracting light, similar to a diffraction grating, creating a visually stunning rainbow effect as the ctene paddles rhythmically “beat”. Most ctenophores can also bioluminesce, producing a blue-green light when disturbed, making for another quite stunning visual display - this time in the darkness. Although supremely photogenic, many ctenophore species live in the deep-sea, making them difficult to collect and study. Much of what we know about ctenophores comes from work on a handful of seasonally abundant, and widely distributed, coastal species including Mnemiopsis, Beroe, Bolinopsis, Hormiphora and Pleurobrachia.

In recent decades a renewed interest in ctenophore biology has emerged. Ctenophore anatomy, physiology and embryonic development have been major areas of focus, revealing traits associated with novel aspects of their nervous system, the biomechanics of their unique swimming behavior, bioluminescence production, and their prodigious ability to regenerate lost tissues. Evolutionarily, recent large scale genomics analyses support ctenophores as one of the earliest-branching animal lineages. Ecologically, Mnemiopsis leidyi has emerged as a particularly successful invasive species, establishing populations in several non-native ecosystems. While the number of researchers studying ctenophores has increased, some major drawbacks to working with these animals in the laboratory have included; 1) their limited, and seasonal, availability in the wild, and 2) their fragility. For example, collecting ctenophores using traditional plankton tow-nets often results in extensive and irreparable damage. Scooping or ‘dipping’ ctenophores out of the water with a beaker, or something similar, is the easiest way to collect these fragile animals from the water’s surface without damage.

This has traditionally limited researchers who work with these animals to those that have both easy access to a marine station and the ocean. Beyond collecting, keeping ctenophores alive, and healthy, in the lab has also been difficult. In captivity, strong currents cause repeated contact with hard surfaces like tank walls, and similarly, strong aeration can cause turbulence resulting in irreparable tissue damage. The most significant barrier, by far, to the long term maintenance of ctenophores in a laboratory environment is the need for a near-constant source of planktonic live food. While having access to the ocean and natural seawater can help mitigate these issues, very few researchers beyond the oceans edge have access to these resources.

Even in southern Florida, where the ctenophore Mnemiopsis leidyi is easy to collect coastally, we faced difficulties in reliably finding animals during the warmer summer months of the year. Although we could keep wild collected Mnemiopsis alive in low-flow tanks, embryo production rapidly declined the longer they were kept in the lab, making it difficult to perform experiments requiring embryos during much of the year. Our protocol goal was to eliminate the reliance on the constant collection of wild animals by developing methods for maintaining healthy ctenophores over multiple generations and focusing on the ability to produce embryos year-round, similar to other laboratory/genetic model systems.

Our protocol paper details the techniques and resources that we have used to successfully culture a healthy Mnemiopsis lab strain – currently 52 generations without obvious inbreeding issues. The main takeaways are:

1)    Housing: While we use a large custom-made acrylic tank to house large individuals, any standard aquarium, bucket or large beaker can be used to house Mnemiopsis as long as there is little to no water turbulence. If animals are kept in stagnant water, frequent small water changes are necessary to maintain acceptable water quality. Juvenile ctenophores are less susceptible to poor water quality than large adults.

2)    Diet: Taking some inspiration from the literature on large-scale zebrafish housing, we determined that rotifers were the best staple food source. Rotifers are; 1) small enough that newly hatched cydippid ctenophores can capture and eat them, and 2) they can be grown rapidly to the high densities required for providing a continuous food source to large adult ctenophores.

3)    Experimental use: A major aspect of our protocol is how to obtain embryos for genetic experimentation, specifically CRISPR/Cas9 genome editing, demonstrating the utility of reliably maintaining a lab strain. The ability to spawn our lab animals on demand is a huge boon for performing embryonic and molecular genetic experiments.

4)    Collaboration: A very exciting aspect of this paper has been the opportunity to collaborate cross institutionally with the Monterey Bay Aquarium (MBA) and the Monterey Bay Aquarium Research Institute (MBARI) where similar efforts are ongoing to propagate several different ctenophore species for public display and for scientists doing research. Both MBARI and MBA have pioneered methods for recording, capturing and displaying many deep-sea marine species, including invertebrates like cnidarians and ctenophores. This protocol paper is a prime example of how scientists in completely different environments with very different goals can collaboratively work together to produce a body of work extremely valuable to the research community, conservation and the broader public (ctenophore displays at MBA).

With the ever-growing interest in ctenophores and their remarkable biology, our protocol goal was to detail the best practices that have worked for us to maintain healthy captive ctenophore populations. We are confident that these protocols will serve as a foundation allowing researchers, educators and ctenophore enthusiasts to maintain and study these animals regardless of their distance from the ocean! 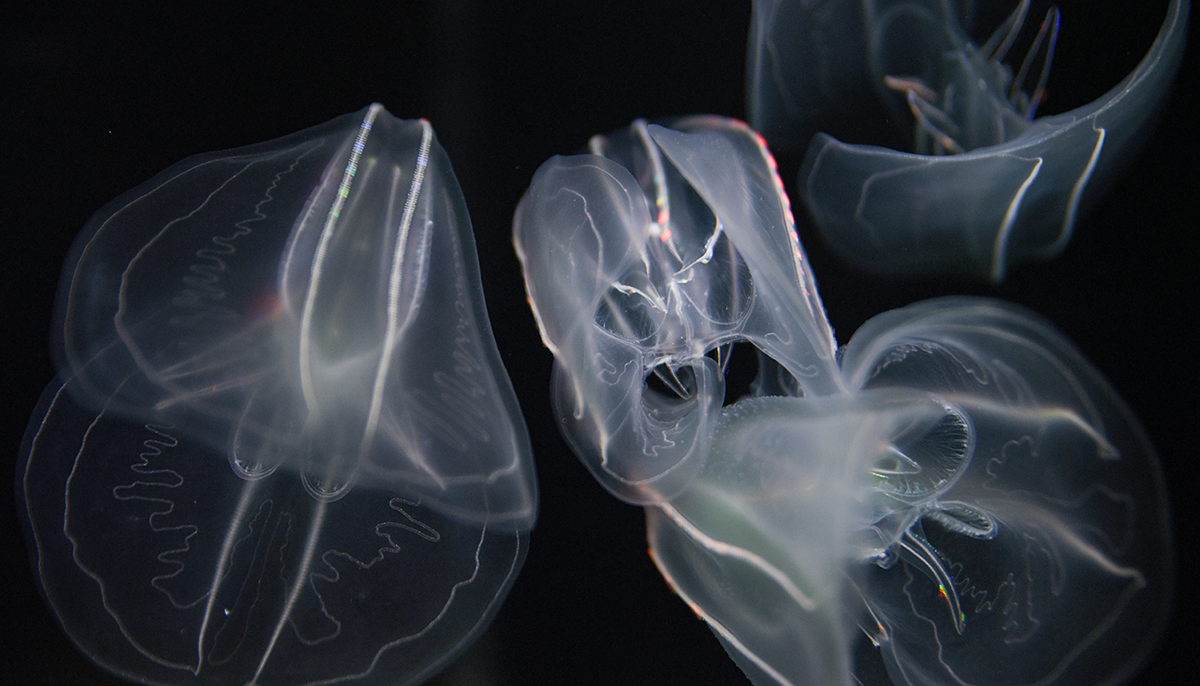 Our protocol paper details the techniques and resources that we have used to successfully culture ctenophores in the lab.