From the moment we first published the first manuscript describing graphene tattoos and their use for health monitoring, it attracted remarkable attention from scientific circles and the general public via major news outlets. In personal and conference conversations, we would meet two kinds of people: optimistic and enthusiastic about these atomically thin tattoos and their prospects; and pessimists who would blast us with reasonable doubts on the technical side of the invention. However, one typical line of those conversations with both kinds of people would comprise the details of tattoo fabrication, transfer, scalability, electrical contacts, and user-friendliness.

While the fabrication routine, as thoroughly described in our recently published Nature Protocols manuscript, might seem straightforward, it turned out to be impossible to convey in the frameworks of “materials and methods” sections of the original manuscripts. Hence, we decided to put an extra effort to build such a protocol manuscript to convey the method to broader scientific circles and even non-professionals. We intended to ensure that the steps can be reproduced in the simplest laboratories, in almost do-it-yourself (DIY) conditions. To boost the DIY concept, we used low-cost open-source hardware Open-BCI as means to record and interpret human electrophysiological signals such as brain activity (EEG), heart activity (ECG), muscle movements (EMG), and even eye gazing monitoring (EOG). We hope that such accessibility of the technologies will lead to their broader penetration into our daily routines, promote science for kids and the general public. Of course, we also expect that graphene tattoos will inspire scientists from other diverse disciplines to use them for their everyday research (e.g., one can use the tattoos to study the electrophysiology of plants).

Attached to this blog is also a humorous "graphene fabrication" recipe targeted at kids, which we would be happy to spread around the internet, promote accessibility of science technology. Please share! The other common misconception about graphene, especially high-quality CVD grown graphene used for tattoo fabrication, is speculation that it is "expensive." Graphene was indeed expensive a few years ago. In early 2021, you can buy high quality monolayer graphene grown on copper foil for as little as 50-90 cents/cm2 (check this and this suppliers). Moreover, the prices are driven by market readiness, and further scaling of technology is possible and even planned for; hence the graphene prices are expected to only go down soon, by at least 10-fold.

In the final remarks, I would like to address another frequent opinion that we had frequently received regarding the reproducibility and user-friendliness of the technology. Moreover, a few reviewers have raised the same concerns during the peer review process, and I am actually re-using some of my "replies to reviewers" document below. From watching the supplementary videos accompanying the manuscript, one would think that the process is tedious, can only be done by skilled researchers (e.g., me), and yield is highly person-dependent. This is not exactly true. The process is indeed slow when you do it the first time, and the scale is usually small since we are doing research, not production. Yet, the steps are relatively easy to follow than they look like. I had learned the process from Shideh Kabiri Ameri, and it took me a while to get all the bits-and-pieces together. I made dozens of mistakes (some of them - on purpose) to build this comprehensive protocol with a complete troubleshooting rubric. The protocol was actually “tested” on two undergraduate students, co-authors of the work: Alena Nederveld and Jameson Kampfe, who learned the process through it. Their experience can be expressed in this e-mail fraction I got from Jameson during the peer review process: “On comment from the manuscript reviewer, it could be beneficial to mention the improvement I experienced in terms of skill at applying the graphene since I only worked hands-on with the GETs for about 3 months. I initially had a success rate of applications of ≤50%. After a few weeks of ~15-20 applications per week (on both synthetic skin and real skin), the success rate improved to 70%+, indicating an intuitive, strong increase in ease of use.” Personally, I can now manufacture a few dozen pieces of 2x2 inch graphene tattoos in one week, spending as little as 2 hours per day on this task. This supplies our entire research needs for a few months ahead. Moreover, these steps can be easily automatized and industrially upscaled, yet an actual application is required for the process to be attractive for investors. We would generally be happy to discuss with third parties who want to take the technology to the next level.

You want to know more? Read the paper:

Getting a feel for AFM 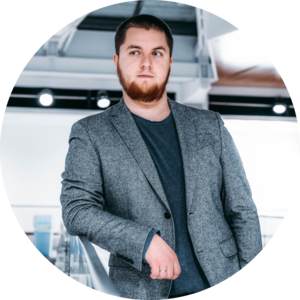 Postdoctoral Research Associate, The University of Texas at Austin