This story is about the recruitment and training of an agent to infiltrate a cell and reside there unnoticed, until a masked delivery of destructive weaponry allows it to wreak havoc on its erstwhile home.

Apologies if I got your hopes up, but the agent in question is not a spy from a le Carré novel – rather, an unassuming bacterial enzyme, called nitroreductase. As its name suggests, this is an enzyme able to reduce nitro groups – more specifically, those attached to an aromatic ring. Reduction of a strongly electron-withdrawing aromatic nitro substituent, to an electron-donating hydroxylamine or amine, yields one of the most substantial changes in electronic charge distribution that can be catalyzed by a single enzyme. This can in turn have a profound effect on the reactivity of other substituents, or of the aromatic ring itself.

This ability to “flick an electronic switch” that dramatically alters the reactivity of target aromatic molecules has been exploited by clever medicinal chemists, who have designed prodrugs that are activated to toxic drugs by nitroreductase enzymes present in invading cells, or in a patient’s own cells under certain conditions. An important prodrug example is metronidazole, a widely-used antibiotic that is activated by bacterial nitroreductases to a DNA- and protein-binding poison. Because the drug form is tightly cell-entrapped, its toxic effects are confined to the activating cell.

I first encountered nitroreductase enzymes as a postdoc at Stanford in the early 2000s. Although I was originally recruited by Prof AC Matin to study the potential of these enzymes to remediate environmental heavy metal pollutants, our team also became interested in possible cancer gene therapy applications. There, the idea is that vectors such as tumor-targeting viruses or bacteria can be used to deliver nitroreductase genes to cancerous cells and thereby render them - but not healthy tissues - sensitive to nitroaromatic prodrugs.

This approach offers fantastic prospects for precision medicine. However, the number of different ‘moving parts’ that must all interact effectively – e.g., the need to develop a prodrug with optimal pharmacokinetic and pharmacodynamic properties and high therapeutic index, then pair it with a nitroreductase that can activate it efficiently under physiological conditions, then identify an effective gene delivery system that will evade the patient’s immune system prior to gene delivery but help recruit it post-release of tumor antigens – poses substantial scientific challenges, even before considering any clinical concerns around administering pathogenic microbes to patients.

I was therefore immediately interested when Ethan Scott, a fellow Stanford alum who was by then running his own zebrafish lab at the University of Queensland, told me about an elegant adaptation of the nitroreductase-prodrug system developed by Jeff Mumm (Johns Hopkins University). Jeff came up with what I view as “a cheat’s version of gene therapy”, creating lines of zebrafish bearing transgenic nitroreductase genes under transcriptional control of promoters specific to a target cell-type. This very neatly circumvents all of the issues associated with gene delivery, providing researchers with lines of fish where specific cell types can be ablated on-demand by administration of metronidazole prodrug to the aqueous environment – e.g., in fish bearing a nitroreductase under control of an insulin promoter, pancreatic β-cells can be ablated at any stage of development.

While the market for diabetic fish is somewhat limited, Jeff’s system has much wider applications in studying how specific cells can be regenerated – a nifty trick the zebrafish is particularly good at – or the physiological effect of eliminating a specific type of cell. For example, his approach is very useful for teasing apart the roles of immune cell sub-types, which is pretty pertinent when a new kind seems to be discovered every other day. It is also an immensely powerful system for modelling degenerative disease, and/or screening for drugs that promote regeneration of ablated cells or tissues (co-expression of a fluorescent reporter protein in the target cells allows visualization of tissues prior to ablation, and of subsequent regenerative processes). The impact that Jeff’s system has had on the zebrafish field is apparent in its widespread uptake, with Google Scholar indicating that well over 1,000 published studies have used it to date.

Unfortunately, the original iteration of this system was limited by the first-generation nitroreductase (which we now term “NTR 1.0”) being catalytically inefficient with metronidazole. While this has usually not been a major concern for studies targeting cell types defined by a very strong promoter, in many cases achieving effective ablation has required use of metronidazole doses that are toxic or near-toxic to healthy cells as well. This has proven particularly problematic for scientists (not to mention fish) involved in multi-day studies.

Having been generally interested in this system since Ethan first brought it to my attention, I was pleased to be contacted by Jeff for help improving the nitroreductase ablation system (even more so when he turned out to be a really nice guy, and excellent collaborator). My lab at Victoria University of Wellington in New Zealand specializes in enzyme engineering and evolution, and we already had an interest in metronidazole as a substrate for nitroreductases.

At this stage, it is important to note that the name “nitroreductase” is a little misleading – no one has yet identified an enzyme that is believed to play a primary biological role of reducing nitroaromatic compounds, of which very few exist in nature. Thus, it is not really surprising that most nitroreductases are catalytically inefficient with nitroaromatic substrates like metronidazole, as this does not seem to be an activity nature has selected for. Nevertheless, even with non-natural substrates, useful information can often be gleaned by assessing how closely-related enzymes differ in their activity levels. In this particular case, some very nice detective work by two PhD students (Elsie Williams and Abby Sharrock, now both postdocs), highlighted two highly-conserved amino acid residues within the active sites of related nitroreductases as being likely to interfere with metronidazole activation. By substituting these amino acids with more-compatible alternatives, Abby was able to substantially improve metronidazole activation by each of these enzymes, with one variant appearing especially effective.

Abby and another then-PhD-student, Kelsi Hall (now a postdoc at the Norwegian University of Life Sciences in Ås) were hosted by Jeff and his wife Meera for a few months in their Johns Hopkins lab, and helped to screen some proof-of-principle transgenic zebrafish lines, which ultimately gave very promising results. Jeff’s team (in particular, Dr Tim Mulligan) then conducted an extremely comprehensive evaluation of the new nitroreductase – “NTR 2.0” – across a range of scenarios, where it consistently exceeded the ablation performance of first-generation nitroreductases – requiring 100-fold lower concentrations of metronidazole for effective cell ablation.

The manuscript describing this work has now been published in Nature Methods (doi 10.1038/s41592-021-01364-4), and Jeff has gone on to create a series of ready-to-use transgenic resources to make NTR 2.0 as accessible as possible to the research community (https://www.addgene.org/Jeff_Mumm/). And the banner photo? That's me in the middle, attempting to infiltrate Jeff and Meera's lab during the visit of Abby (far left) and Kelsi (far right). Thank you both for your fantastic hospitality, and of course for the huge effort your team put into testing our NTRs during a very testing pandemic. 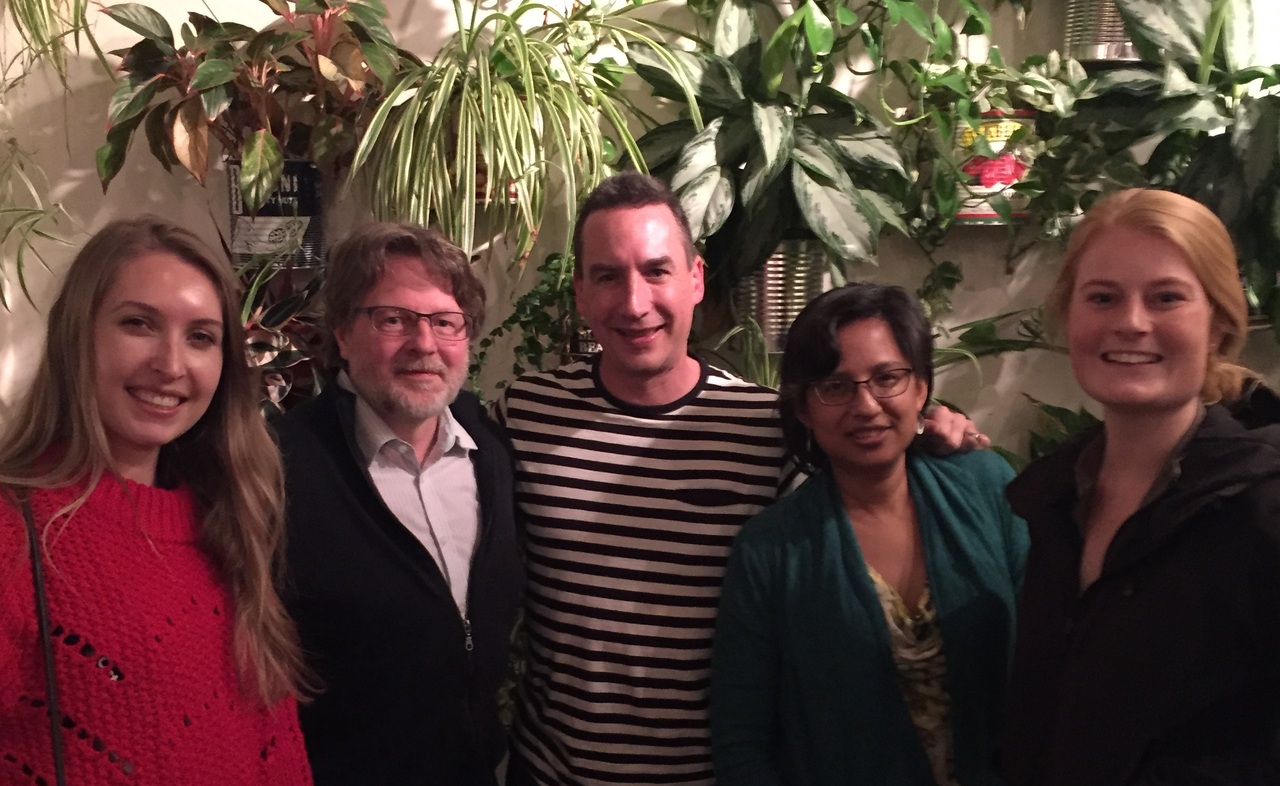