ELI trifocal microscope (ELI-TriScope) is developed here as a precise cryogenic fabrication system, by setting up an electron beam, a light beam and an ion beam at the same focal point to achieve accurate and efficient preparation of a target cryo-lamella.
Shuoguo Li and Yun Zhu
2 contributors
Like Liked by Evelina Satkevic and 2 others
0

“Seeing is believing”. Three-dimensional (3D) visualization of the cellular ultrastructure is an important step in understanding life. Meanwhile, cryo-electron tomography (cryo-ET) has become a unique technique to study the in situ high-resolution structures of biomacromolecular complexes and the locations and interactions of these complexes with their native cellular environment, which is poised to bring another revolutionary breakthrough in structural biology in the near future. However, many obstacles still exist in applying cryo-ET widely and efficiently for in situ structural study, especially the low quality, low efficiency, and low accuracy of specimen preparation methods1.

Due to the limited penetration distance of electrons at the current accelerating voltage (300 kV) of the modern microscope, a thin (~ 200 nm) cryo-section of a cell or tissue specimen should be prepared. Cryo-focused ion beam (cryo-FIB) milling has been proven to be an efficient method to prepare high-quality cryo-lamellae of cells for in situ structural study2,3. Furthermore, to enable accurate preparation of cryo-lamellae in the target region by cryo-FIB milling, cryo-correlative light and electron microscopy(cryo-CLEM) has been emerged as the times require. The conventional cryo-CLEM workflow requires a stand-alone fluorescence microscope with a cryo-stage for cryo-fluorescence imaging4-6, followed by cryo-scanning electron microscopy (cryo-SEM). A correlation alignment between the cryo-FM and cryo-SEM images is then generated and used to guide cryo-FIB milling7-9. This workflow is complicated and ensuring sample quality is challenging due to multiple transfers between microscopes.

Here, we developed a new cryo-CLEM system named ELI-TriScope to achieve accurate and efficient preparation of target cryo-lamellae. Based on a commercial dual-beam scanning electron microscope (SEM), ELI-TriScope incorporates a cryo-holder-based transfer system and embeds an inverted fluorescence imaging system just underneath the vitrified specimen. In ELI-TriScope, an electron (E) beam, a light (L) beam and an ion (I) beam are precisely adjusted to the same focal point; as a result, cryo-FIB milling can be accurately navigated by monitoring the real-time fluorescence signal of the target molecule (Fig. 1). With ELI-TriScope, there is no need to add fiducial markers or perform sophisticated correlation alignment between cryo-FM and cryo-SEM, leading to essentially markedly improved efficiency, accuracy, success rate and throughput of cryo-FIB milling compared with other reported cryo-CLEM techniques.

Figure 1. Design and principle of ELI-TriScope. (a) Schematic diagram and design drawing of ELI-TriScope in its operational mode. Each part of the system is labelled and described. IB, ion beam. LB, light beam. EB, electron beam. FIB, focused ion beam. (b) Working principle of ELI-TriScope. The ion beam and light beam are simultaneously focused on the area of interest of the cryo-specimen. The reflected light image recorded by the camera displays the cell body, and the target signal in the fluorescence image is used to navigate cryo-FIB milling.

Using ELI-TriScope, we prepared 72 high-quality cryo-lamellae of HeLa cells with a high success target rate (~91%). We collected 75 cryo-ET tilt series of cryo-lamellae and study the in situ structure of the human centriole. We observed multiple components of human centrioles in their native states(Fig. 2). With a preliminary STA procedure, we could resolve the single protofilaments of MTTs and observe their longitudinal periodicity.

In summary, we developed an advanced precise and efficient cryo-FIB fabrication technique with the name ELI-TriScope and applied this technique to study the 3D in situ structure of the human centriole. Our results have demonstrated that ELI-TriScope will have wide application in future in situ structural biology and in studying the high-resolution ultrastructure of specific events in the cell. 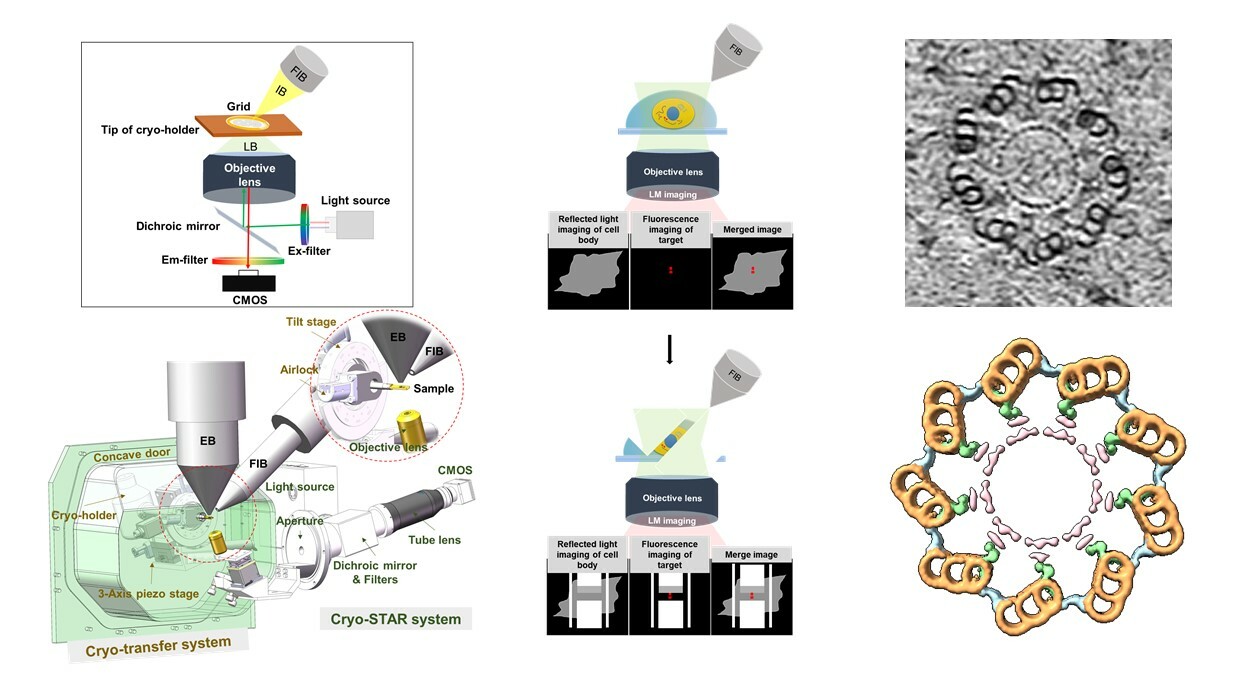 ELI trifocal microscope (ELI-TriScope) is developed here as a precise cryogenic fabrication system, by setting up an electron beam, a light beam and an ion beam at the same focal point to achieve accurate and efficient preparation of a target cryo-lamella.