We developed Custom-Access Serial Holography (CASH) as a method to improve the sampling from neuronal activity indicators in 3D cortical brain circuits. While genetically-encoded activity indicators, such as for inner-cellular calcium concentration, permit a fluorescence readout of electrical excitation of neurons, the sampling of such signals from the brains of behaving animals is slowed by the serial image acquisition in multi-photon excitation microscopy. Serial acquisition, however, is required for maintaining cellular resolution in brain tissue given significant light scattering at depths about and beyond one scattering length (about 60-80 µm in the mouse brain for 500 nm light). At the same time, sampling speed needs to be sufficiently high to track the indicator response to action potentials as the elementary units of the neuronal code. The limitation in sampling speed is particularly adverse in in-vivo recordings because of the 3D structure of brain circuits as the acquisition speed degrades linearly with the number of planes to scan. Furthermore, full frame imaging of neuronal function is intrinsically inefficient due to the time spent to scan spaces and objects of no interest, like the extracellular space and cellular compartments that do not contribute functional information, like cell organelles and/or the neuropil, for instance. The problem further aggravates in measurements using genetically encoded voltage indicators (GEVIs), in which case the only compartment of interest is the neuronal plasma membrane.

CASH was developed as a serial sampling method of optimal efficiency based on random access scanning of a population of neurons, or other targets, while bypassing all voxels that do not contribute functional information and thus are of no interest. For this, CASH limits the scan to a set of discrete and freely programmable points of interest (POIs) with each point chosen to center-mark an object of interest in 3D space, for example a neuron cell body. During acquisition, the scan engine sequences through the set of predefined POIs to deliver exactly one laser pulse to each POI before moving on to the next POI. At the same time, each pulse is holographically patterned into a rectangular grid of diffraction-limited focal spots spreading across the target object to maximize the total two-photon excitation volume and hence the single pulse emission yield. However, target positions, measured in the coordinate frame fixed to the microscope, are subject to uncertainty as a consequence of small amplitude brain motions during animal behavior. To account for this uncertainty, and to prevent motion-induced recording artefacts from head-fixed animals, the grid is given a size slightly larger than the object itself such as to fill the whole space the target is likely to visit in the course of an experimental trial. In our experience, when targeting entire cell bodies, good performance is usually achieved with the grid extending into the near peri-somatic space exceeding the diameter of the target cell by less than a factor two.

Technically, the implementation of 3D-CASH requires spatial light modulation with fast cycle time to offer a full pulse-to-pulse phase control of the laser beam. Our current implementation is built upon a biaxial acousto-optic light modulator slaved to the emission clock of a 40 kHz regenerative femtosecond laser amplifier (Figure). In this way, the system provides every laser pulse with an independent modulation of spatial amplitude and phase in a plane conjugated to the back focal plane of the objective in an otherwise standard two-photon microscope, with the acousto-optic modulator replacing the pivotal scan mirrors. The modulation repertoire includes tilt and defocus for 3D random access as well as biaxial holographic modulation for focal light patterning. While the PIO target coordinates are determined by the amplitudes of tilt and defocus, the hologram determines the spatial distribution and number of focal excitation spots forming the grid. In the current implementation, the method permits CASH recording from 20 neurons at 1 kHz, 40 neurons at 500 Hz, 100 neurons at 200 Hz and 200 neurons at 100 Hz in a 500 x 500 x 400 μm3 volume. We tested 3D-CASH in recordings of internal calcium concentration in a population of neurons in layers 2/3 and 5 of mouse primary visual cortex while the animals were freely behaving on a treadmill with their head position fixed to the microscope coordinate frame. Cell bodies were targeted with 5x5 focal spot grids of 16 x 16 to 20 x 20 µm2 square size for two-photon excitation of GCaMP6f at a rate between 200 and 500 Hz. From the recorded fluorescence signals we inferred the times of action potentials in each neuron and demonstrated the orientation and phase tuning of individual neurons to moving contrast gratings and the structure of pairwise correlations between neurons in different laminar layers. Simultaneous electrode recording under population recording conditions (50 neurons), revealed that action potentials in a pyramidal neuron were inferred with 0.46 and spike doublets with 0.73 probability, while spike bursts involving three or more spikes were detected with 100 % certainty.

3D-CASH offers optimal sampling of neuronal targets in a 3D volume within the serial acquisition framework. While excitation multiplexing provides an alternative to serial acquisition with the possibility to reach even higher sampling rates under favorable conditions, such methods tend to suffer from tissue heating and accumulated background fluorescence, evoking the risk of tissue damage and loss of indicator sensitivity, respectively. 3D-CASH requires much lower laser power and allows to target every neuron in the population with an individualized excitation pattern for an optimal balance of efficient indicator usage and leveling of brain motion effects. At the same time, the method permits unprecedented high sampling speed in recordings from neuron cell bodies in 3D. Temporal resolution is a critical parameter for the analysis of spike correlations in networks of neurons as the relevant time scale for neuronal integration is set by the membrane time constant (10-15 ms in pyramidal neurons). To meet this time scale, temporal resolution of recordings should exceed 100 Hz, a condition which is hardly met in standard calcium measurement performed in the imaging mode, especially in volumetric recording. The method also holds considerable promise for future GEVI recordings in two-photon excitation mode given the intrinsic speed of the GEVI action potential response calling for sampling speeds of 500 Hz and faster.

In summary, 3D-CASH adds to the optical toolbox of "smart" sampling methods in response to the need to increase the population size of recorded neurons in 3D tissue at an acceptable level of spike inference error and with better than 10 ms temporal precision.

by Walther Akemann and Laurent Bourdieu 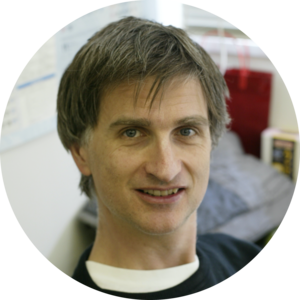 I am interested in the foundations of perception, cognition and adaptive behaviour in animals, humans and artificial systems, as well as in computational and engineering tools to help produce empirical evidence for the understanding of brain function.