Cell identity is determined by the selective activation or silencing of specific genes via combinations of transcription factor binding and epigenetic modifications on the genome. Chromatin immunoprecipitation followed by sequencing (ChIP-seq) has been the standard technique for examining protein-DNA interactions across the whole genome. Recently, several alternative methods to ChIP-seq have been developed for low-input epigenomic profiling. It is still challenging to obtain multiple epigenome from the same sample in despite the necessity. We previously published an immunoprecipitation-free method termed Chromatin Integration Labeling followed by sequencing (ChIL-seq; Harada et al., Nature Cell Biology, 2019). ChIL-seq has been demonstrated as particularly useful for the epigenomic profiling of low-input samples or even single cells.

We reported here the detailed protocol of ChIL-seq and a new application of ChIL technology to simultaneously detect multiple epigenomic information in single specimens (Figure: Multi-target ChIL-seq or mtChIL-seq). This technology enables a comprehensive analysis of combinations of factors that could previously only be analyzed individually. There is no need to divide a precious sample into multiple tubes, which is a great advantage over the other methods, opening an avenue to a single-cell multiplex epigenome. We also described assessment methods for the key steps, including preparation of ChIL probes, evaluation of immunostaining, transposition, in situ transcription, and sequencing library preparation. These assessments will be useful to apply ChIL-seq to a variety of samples and the targets of interest. 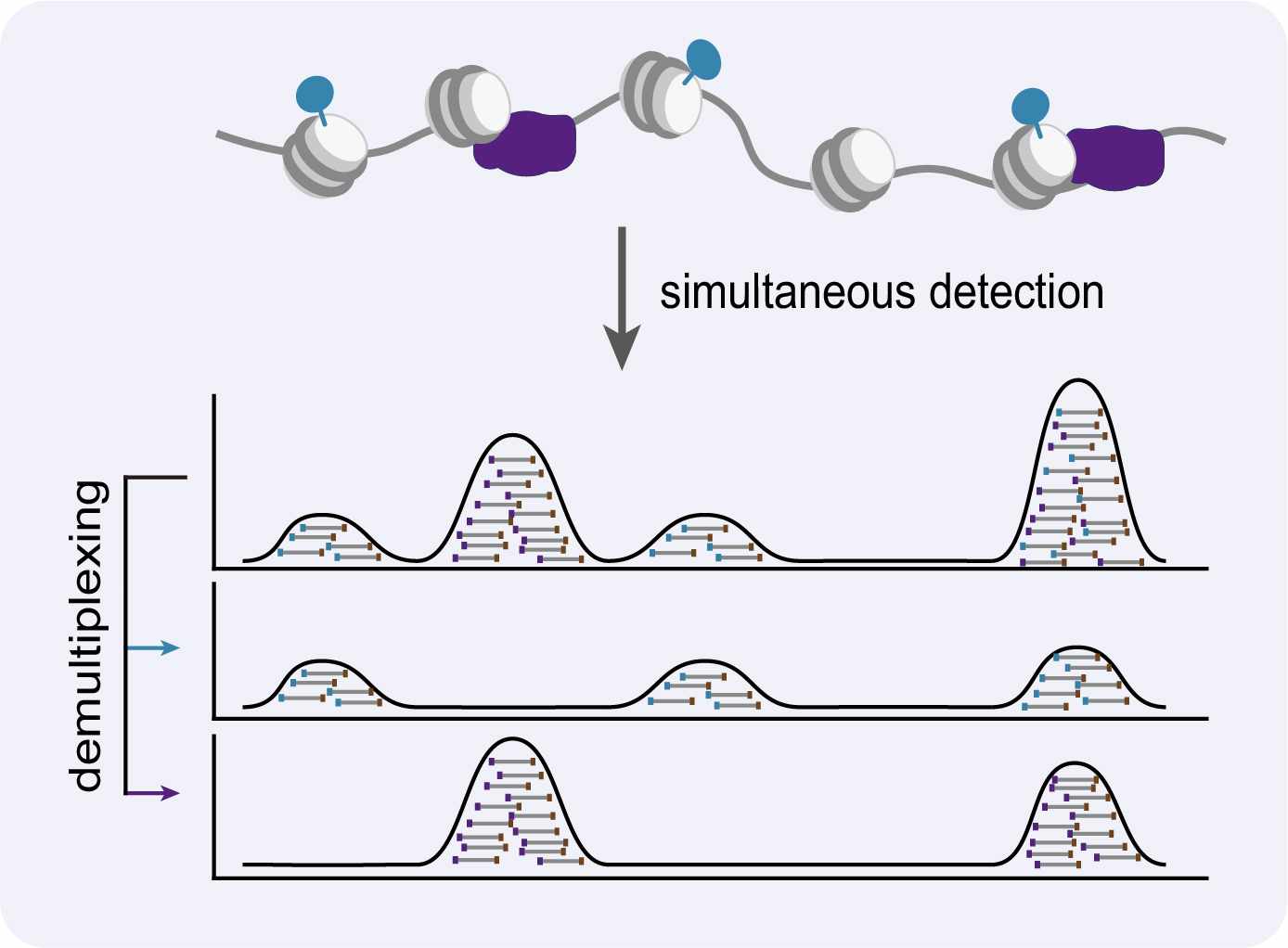 The most difficult part of ChIL-seq technology development was the first, integration step. We raised many different ideas for generating ChIL probes and methods to label proximal regions of the target protein and modification. After many trials and failures, we finally ended up in the immunostaining-based labeling with an antibody-DNA probe and Tn5 transposase-mediated integration. The second step, RNA-mediated linear amplification, was unique to ChIL-seq among recent ChIP-alternative methods. We thought this should be suited to the low-input analysis and optimizing this step was relatively straightforward, although it took time. The third, sequencing library preparation step was adapted using a recent ultra-sensitive RNA-seq kit that can be used for low-input and single-cell analysis. Even based on a commercial kit, designing an appropriate primer set and optimizing the reaction conditions were required. Overall, most reactions were empirically set up, yielding an optimized protocol at the end.

The ChIL strategy has unique features compared to the other methods and provides a broad range of applications. Given the flexibility of designing the DNA sequence conjugated with antibodies, ChIL was adapted for multiplexed analyses from the same sample (mtChIL-seq). By ChIL platform, unlike the other epigenomic profiling methods, the localization and the level of the target protein or modification can be visualized under a fluorescent microscope in the sample to be analyzed by sequencing, allowing us to possibly link the spatial and genomic distributions. It is ideal to perform epigenomic profiling while retaining spatial information reflecting the tissue microenvironment in a heterogeneous population, where specific cells were distributed and what kind of neighboring cells were interacted, to understand the cell differentiation and tissue formation. Furthermore, by combining live-cell imaging, transient epigenome changes during development and differentiation could be analyzed using the same sample.

We anticipate ChIL-based technology, including mtChIL-seq, will be a powerful tool to reveal previously inaccessible epigenomic information.

Isabell Bludau
Springer Nature Protocols and Methods Community
We use cookies to help improve your experience. By continuing to browse our website you are consenting to our use of cookies.
Learn more