Following up our Molecular Cell paper last year, where we outlined the development and application of ATAC-Me to perform joint-profiling of chromatin accessibility and DNA methylation dynamics in differentiating cells, we’re excited to share our detailed ATAC-Me protocol.

ATAC-Me was initially developed by then graduate student Kelly Barnett, during his PhD in Emily Hodges’ lab at Vanderbilt University. Kelly, Emily, and I were interested in understanding the functional relationship between DNA methylation and chromatin dynamics in epigenetic gene regulation. Though DNA methylation has been studied for decades, the field still struggles to understand its ultimate function. Initial work developed a model where DNA methylation silences transcription through inhibiting transcription factor binding (Figure 1). However, these studies focused primarily on CpG dense regions, termed “CpG islands”. These regions typically overlap promoters and are shared between many distinct cell types. Unlike promoters, however, more recent studies have shown that DNA methylation is more variable at distal regulatory elements, such as enhancers. Furthermore, differential methylation at distal regulatory elements is critically important as their methylation states are associated with genes that control human cell type specification. 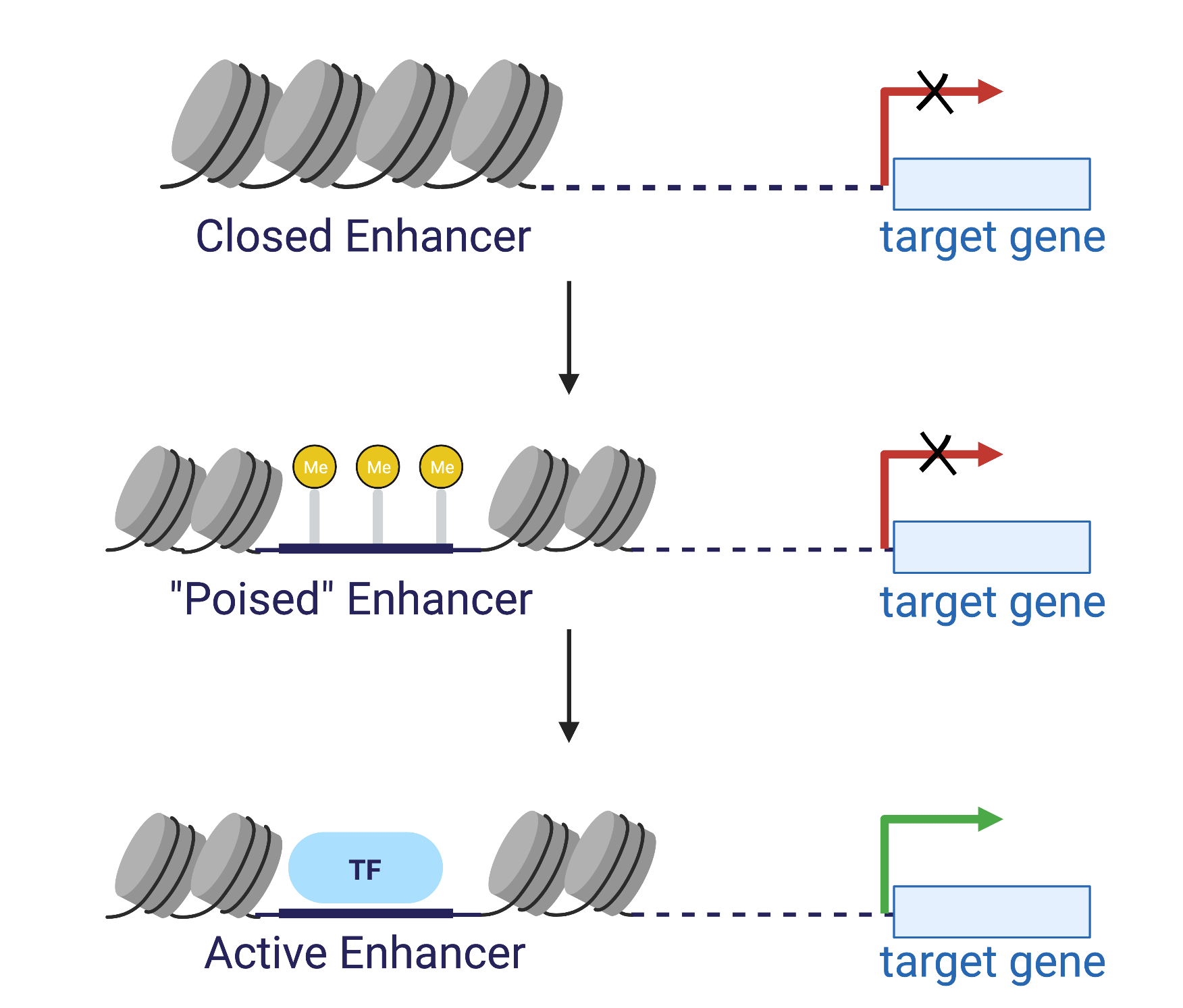 Figure 1: Canonically, DNAme is understood to silence gene expression. In this model, a region must first gain accessibility then lose methylation to activate transcription of the target gene. Figure created using Biorender.com.

In his Molecular Cell paper, Kelly found sustained DNA methylation co-occurring with dynamic chromatin accessibility of gene enhancer regions and gene expression during differentiation (Barnett et al. 2020). These data, and work by other labs, suggest DNA methylation may not be strictly repressive to active gene transcription. More studies need to be done investigating the role of DNA methylation in gene regulation and its relationship with other epigenetic marks to generate a comprehensive understanding of its function. Previously, Emily and Kelly had observed bimodal distribution of DNA methylation levels in accessible, DNase hypersensitive sites (Barnett et al. 2020). Based on a canonical model where DNA methylation represses transcription, regions which are methylated and accessible contain contradictory epigenetic information.  We wanted to know what happens to these particular sites during periods of dynamic gene regulation and reasoned a joint-profiling method was ideal to measure both states accurately and simultaneously, leading to the development of ATAC-Me.

An additional benefit of ATAC-Me is its utility as a subsampling method for DNA methylation profiling. Profiling DNA methylation using whole genome approaches can get very expensive quickly due to the deep sequencing coverage needed. As accessible regions of the genome are typically representative of active regions, such as enhancers, we thought combining assay for transposase-accessible chromatin with sequencing (ATAC-seq) with subsequent bisulfite conversion would be a great way to reduce costs and combine data from two epigenetic features spatially.

Kelly had originally applied ATAC-Me at a series of timepoints during a PMA-induced THP1 monocyte to macrophage cell fate transition. When I joined the lab for my PhD training, I was interested in performing this approach in other systems, particularly embryonic stem cell differentiation models. Manipulating DNA methylation in embryonic development models can result in differentiation deficits and/or embryonic lethality. These findings suggest that DNA methylation does have an important regulatory role, and I was eager to apply ATAC-Me to these models to address this. Around this time a fellow Vanderbilt professor, John Karjiolich, and his trainee, Xiang Ye, approached us about applying ATAC-Me to some B-cell lines. All of these cell types required troubleshooting and optimization producing our final protocol. Different systems may require a few additional tweaks, but I have found this procedure to work well for all the cell types we’ve tried it on.

ATAC-Me is built on the foundation of ATAC-seq (Buenrostro et al., 2013) as a Tn5-based method of profiling the accessible genome. The protocol begins with isolating intact nuclei and incubating them with Tn5 and a Tris-DMF reaction mix. We then isolate the fragments produced, which now represent the accessible genome. To preserve DNA methylation data as accurately as possible, we incorporate fragment processing steps from tagmentation based-WGBS (Wang et al., 2013) which also uses Tn5 to fragment genomic DNA. As a consequence, during this method development and optimization, our lab used a lot of Tn5, which is expensive to purchase commercially. To accommodate this, we also now purify our Tn5 in-house. A summarized version of protocol was included in a box of the Protocols paper (Picelli et al., 2014). After the fragments have been processed using gap repair and oligonucleotide replacement, we move on to bisulfite conversion. Following conversion using the EZ DNA methylation kit from Zymo we purify and amplify our libraries for sequencing. (Figure 2) 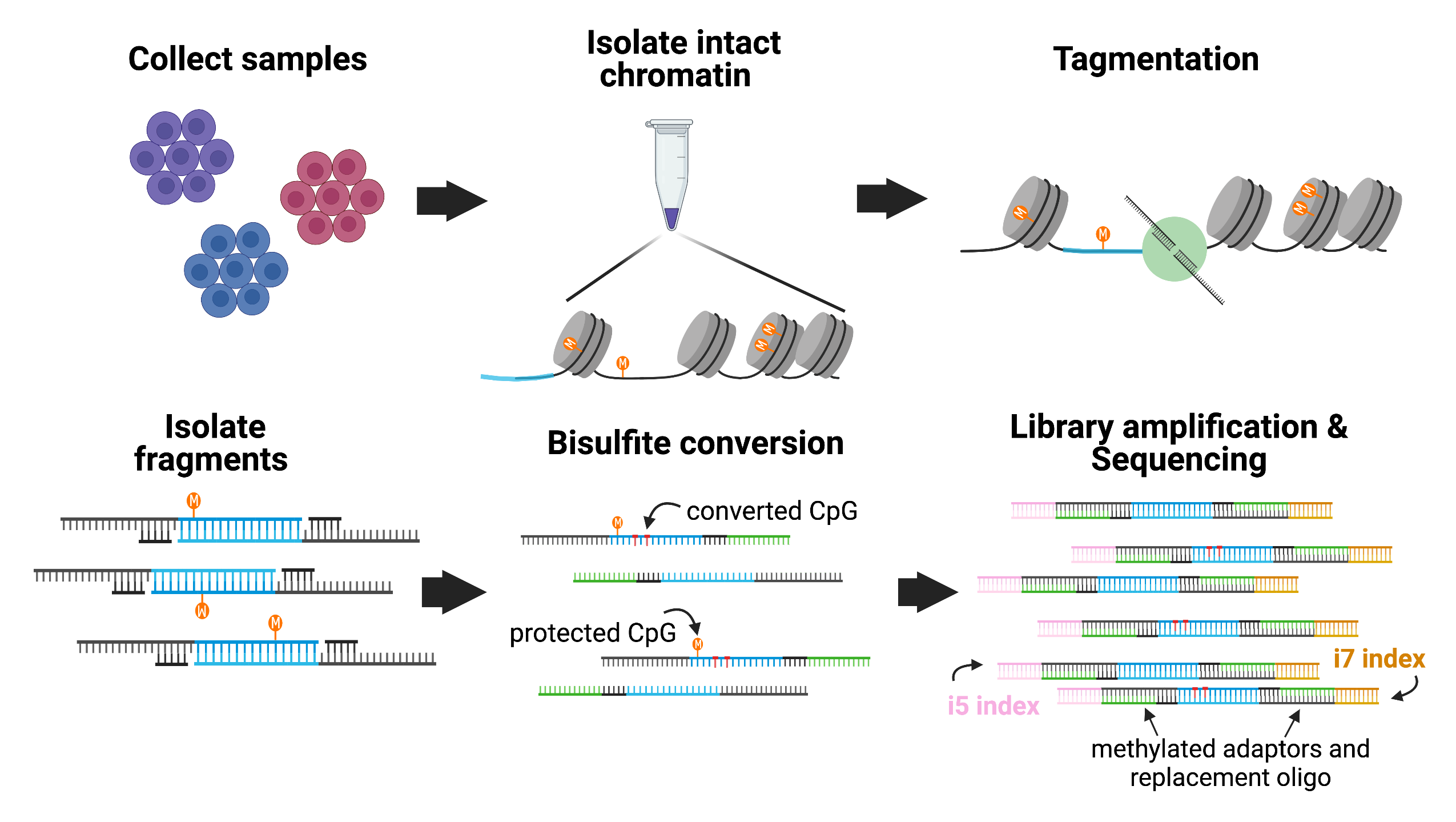 We used ATAC-Me to characterize dynamic epigenetic landscapes during cell fate transitions and have found it very informative for understanding how DNA methylation and chromatin accessibility change relative to each other over these processes. When combined with gene expression data, this allows us to evaluate the combined effects of these features on gene regulation. However, I also believe that ATAC-Me is a great subsampling approach to generate DNA methylation data at a reduced cost. More experiments certainly need to be done to generate a more concrete understanding of DNA methylation’s function outside of its classical repressive role. ATAC-Me is a straightforward, lower-cost method of profiling DNA methylation in accessible regions. 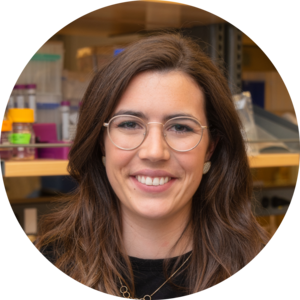