We have optimized a protocol for isolating extracellular vesicle (EV) subpopulations directly from tissue samples. Isolation of EV subpopulations remains a challenge, and this is made even more difficult when using whole tissues as the vesicle source. Our protocol offers one potential solution.
Rossella Crescitelli
Researcher, Sahlgrenska Cancer Centre, Department of Surgery, Institute of Clinical Sciences, Sahlgrenska Academy, University of Gothenburg, Gothenburg, Sweden.
Follow
Like Liked by ALFREDO VENTOLA
0

This protocol describes how to isolate up to six different subpopulations of extracellular vesicles (EVs) from tissues. The procedure includes detailed instructions for EV characterization using electron microscopy, RNA and protein analysis.

I am researcher with 11 years of experience in the extracellular vesicles (EV) field. These tiny particles were first discovered in 19401 and later were shown to play key roles in cell-to-cell comunication2. Using electron microscopy of thin tissue sections, we have shown that both healthy and tumor tissues are composed of cells surrounded by EVs (fig. 1).

The term “extracellular vesicles” is used to indicate a heterogeneous group of bi-layered membrane nanoparticles (50–1000 nm in diameter) that is composed of many different EV subpopulations. It has been shown that these EV subpopulations can have different biological functions3 so it is crucial to be able to isolate and identify these populations. The most common source of EVs is body fluids, and EVs can be relatively easily isolated using approaches like ultracentrifugation, density gradient, size exclusion chromatography, etc. However, isolation of EVs from tissues is much more difficult because the EVs are trapped within the cellular structures and extracellular matrix components.

In 2014, my boss Jan Lötvall, a pioneer in the field of EVs who was the first to report that exosomes can shuttle RNA between cells2, invited me to take up this challenge. “Studying extracellular vesicles in cell supernatants isn’t enough, not anymore; we have to study what happens in reality, in the body,” he told me, and he added: “You will find a way to isolate extracellular vesicles directly from tissues!” Thanks to a strong collaboration with the oncologist Roger Olofsson Bagge, I had the possibility to acquire large numbers of metastatic melanoma tissues that I could use for trying different approaches. After five years of hard work, I produced the protocol recently described in Nature Protocols (lhttps://www.nature.com/articles/s41596-020-00466-1). The protocol still uses the most common techniques for EV isolation like differential ultracentrifugation and ultracentrifugation density gradients, but the critical part of the new protocol is the use of enzymes to release EVs from the entrapping cells and fibers prior to the isolation steps. Using the described protocol, we are able to isolate six unique EV subpopulations (fig. 2).

As described in our recent paper published in Journal of Extracellular Vesicles4, the six EV subpopulations are very different in terms of size, RNA content, and protein content.

We also described a variant of the protocol that can reduce the time of EV isolation from 22 hours to 8 hours. Using this alternative approach, the EV subpopulations are not kept separate but their purity is guaranteed. The modified method was used in another paper published in Journal of Extracellular Vesicles in 20195 where we showed that EV from melanoma metastatic tissues were enriched in mitochondrial proteins and we captured them in plasma of patients affected by melanoma, ovarian cancer, and breast cancer. These findings demonstrated the potential use of tissue-derived EVs as biomarker candidates.

The protocol is currently being used by master’s students, PhD students, and post docs in our lab to isolate EVs from several different types of tissue samples, including both healthy and tumor tissues from both mice and humans, and several papers regarding tissue-derived EVs using the protocol are currently in preparation. The protocol has been patented and a company is using it to discover new biomarkers for disease. We hope that the protocol currently described in detail in Nature Protocols can easily be reproduced by researchers all over the world thus contributing to increasing our knowledge of EVs and their use as diagnostic and prognostic biomarkers.

Rossella Crescitelli
Researcher, Sahlgrenska Cancer Centre, Department of Surgery, Institute of Clinical Sciences, Sahlgrenska Academy, University of Gothenburg, Gothenburg, Sweden.
Follow
Rossella Crescitelli is researcher at Sahlgrenska Center for Cancer Research, Department of Surgery in Roger Olofsson Bagge´s group. She has ten years of experience in the field of extracellular vesicles. Her research work is mainly focused on optimization of extracellular vesicle isolation protocol from body fluids and tissues. She has long experience in analysis of extracellular vesicles and tissues by transmission electron microscopy. After completing her Degree in Medical Biotechnologies (2005 – 2010) at University of Naples “Federico II, she moved in North of Italy for Doctoral studies in Biotechnologies for Human Health, University of Eastern Piedmont “Amedeo Avogadro” (2010-2014). During Doctoral studies, she has been invited by Prof. Jan Lötvall to work at Krefting Research Centre, University of Gothenburg (2011-2013). She worked as post doc fellow at Krefting Research Centre (2014-2019). From 2020 she is employed as researcher at Sahlgrenska Center for Cancer Research in Roger Olofsson Bagge´s group. She is expert in vesicles isolation and characterization as well as she acquired experience in electron microscopy demonstrated by scientific publications in high-quality journals like Nature Protocols, Leukemia, Gene and Journal of Extracellular Vesicles. She established a new protocol to distinguish different subpopulations of extracellular vesicles isolated from cell line supernatants. The results were published on Journal of Extracellular Vesicles and the paper was the most cited in 2014 among the articles published on that journal. She recently optimized a protocol to isolate subpopulations of extracellular vesicles from tumor tissues. The protocols were published in Nature Protocols in January 2021. She is currently working on isolation and characterization of vesicles from lymphatic exudates from breast cancer patients and analysis of DNA in extracellular vesicle subpopulations isolated from melanoma metastases. 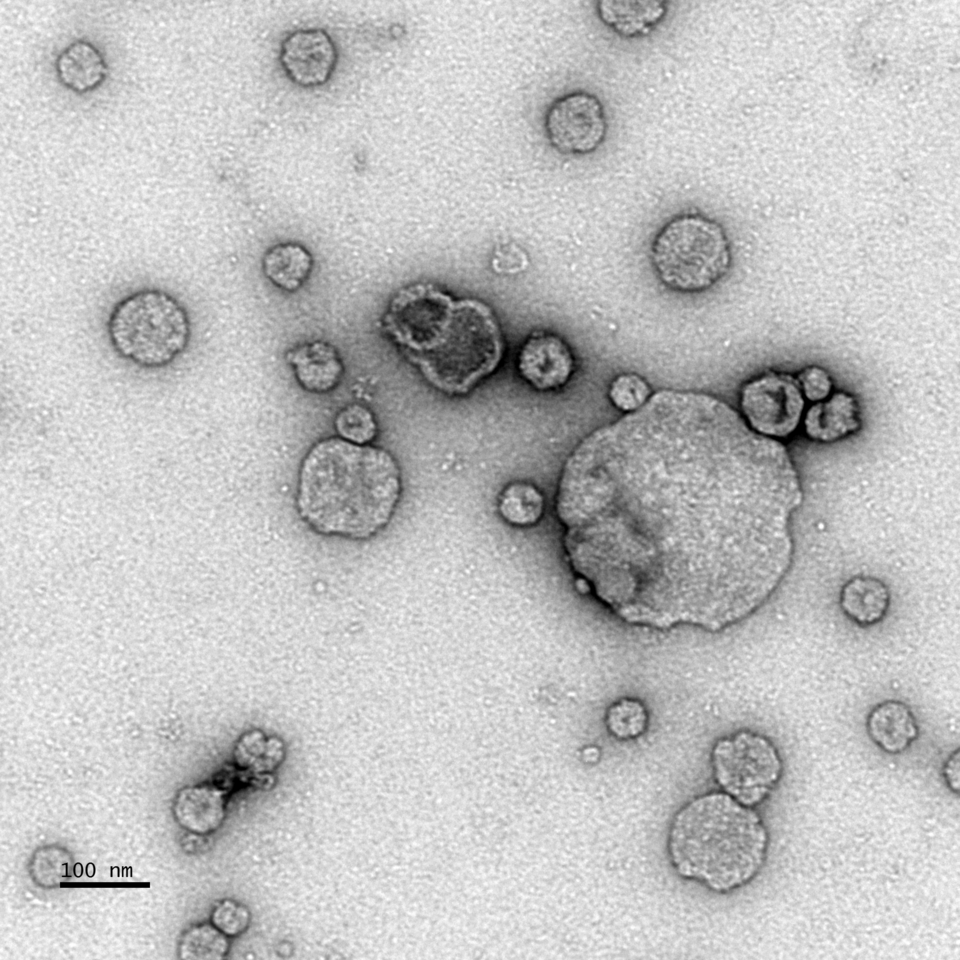 We have optimized a protocol for isolating extracellular vesicle (EV) subpopulations directly from tissue samples. Isolation of EV subpopulations remains a challenge, and this is made even more difficult when using whole tissues as the vesicle source. Our protocol offers one potential solution.