Q-scores provide a quantitative metric for resolvability in cryo-EM maps, and can be used at the atom, residue or macromolecule scale.

The idea to measure the resolvability of individual atoms in a cryo-EM map came about just as cryo-EM maps started to approach near-atomic resolutions of ~2Å and better. Kaiming Zhang in Wah Chiu's group at Stanford and SLAC reconstructed a map of Apoferritin with 1.75Å resolution (shown in the image below). Other groups had obtained even higher resolutions of 1.65Å, 1.62Å and 1.54Å.

Looking at these maps, and even some previous ones of Beta-galactosidase at 1.9Å, contours of individual atoms could arguably be seen. We started to wonder how we might extend previous methods that measure resolvability of groups of atoms (Z-scores) to individual atoms.

After some trial and error, it seemed that values around each atom's position could be combined so that the resulting score quantifies to what degree the atom appeared to be resolved in the map. We named these scores Q-scores. They are described further in our Nature Methods article.

We have already found Q-scores quite useful when evaluating new cryo-EM maps and models. A really useful property of Q-scores is that on average, for well-fitted models, they correlate extremely closely to the estimated resolution of a map. Thus, we could use them to evaluate whether individual RNA chains and ligands are resolved at the level one would expect given the resolution of the map.

Q-scores were implemented as a UCSF Chimera plugin. The plugin has a graphical user interface which aims to make it easy to calculate and visualize Q-scores for individual residues and atoms. Another useful feature of the plugin is that it makes it easy to extract (mask) smaller parts of the map using the fitted model, making it easy to visualize smaller features (e.g. side chains) and their interactions in the map (the α-helix shown in the image above was extracted using this plugin). A tutorial is also available. Suggestions and comments are always welcome! 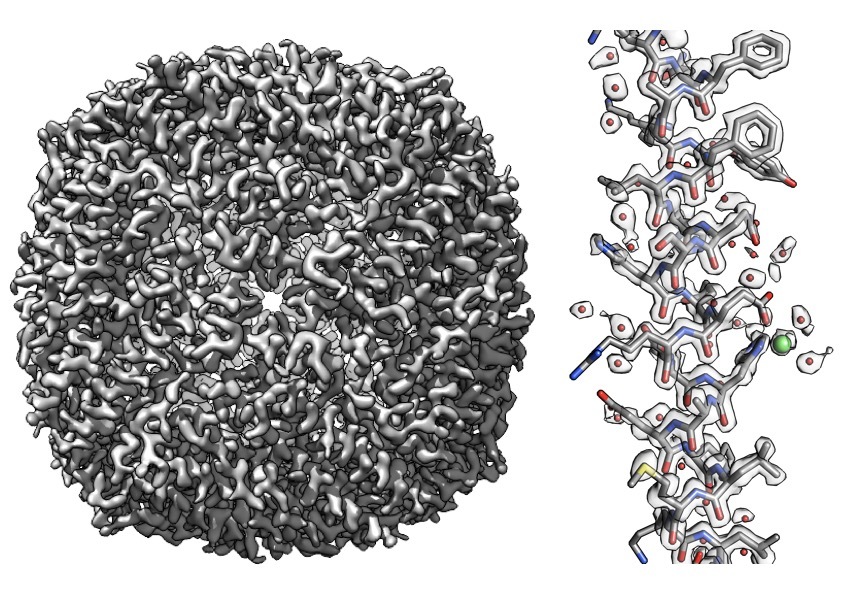