Self-Coalescence physics: Understanding and using the fluid version of a zipper fastener

Self-coalescence occurs when a liquid is stretched and made to fold onto itself. Using microfluidics, their unique properties can be used to engineer and deliver precise sequences of reagents to realize complex portable bioassays.

Coalescence is a physical phenomenon that careful observants see on a daily basis. Two raindrops coalesce when they touch each other on a window pane and quickly fuse together. The phenomenon arises from the fact that there is an energy cost at creating a surface in liquids and that any liquid left without constrains will naturally minimize its surface at constant volume, according to Gibbs minimum energy principle. This is why free water droplets are always round, the sphere being the object with minimum surface for a given volume. However, when water is in contact with a hydrophilic material rather than with air, the situation is reversed, and the drop spreads as much as it can to cover the surface. This favorable contact gives rise to another daily observed physical phenomenon: capillarity, the starting point of a whole research field : capillary microfluidics.

As a physicist specializing in microfluidics, I have made a career at studying transport phenomena at the microscale, trying to turn fundamental fluid physics principles into useful applications in portable diagnostics, analytical chemistry, or separation science. In 2015, I received a phone call from Emmanuel Delamarche from IBM Research Zurich who wanted my opinion on a curious flow phenomenon his team had just discovered in a carefully engineered capillary microstructure. A water drop would be stretched along a capillary barrier that would pin the fluid laterally, creating a long vertical air/water interface above it. Then, at the end of the barrier, the fluid was allowed to turnaround and touch its own air/water interface. Water prefers water to air, and as soon as the two air/water interfaces touched, they started to merge with the hallmark spontaneity of coalescence. The very regular translational symmetry of the flow and its unique way to propagate in a shock-wave-like fashion down the channel gave us strong hints that they could be understood with simple analytical models. Furthermore, this type of flow seemed to completely solve the well-known problem of reagent accumulation at moving liquid fronts as described in details in another blog entry. I happily joined the project, out of sheer curiosity.

After a little reengineering of the device to bring out the fundamental physical aspects, the team was able to make several key observations towards understanding this new phenomenon we had already termed “self-coalescence”. First, we observed that, although the flow had free boundaries, a class of problem known to be very hard to study numerically, it became very regular and smooth when viewed in the reference frame of the moving meniscus rather than in the laboratory reference frame. Indeed, the laws of fluid mechanics (i.e. the Navier-Stokes equation) do not depend on the observer reference frame and give us some freedom on the perspective from which a problem can be studied. Secondly, self-coalescence occurred in channels that were much wider than high, effectively inducing a Hele-Shaw flow, a quasi 2D viscous flow that, paradoxically, can be characterized with powerful mathematical tools developed to study 2D purely inviscid flow fields, like complex variable representation, potential flows, and conformal mapping.

We were thus able to produce a complete picture of self-coalescence flows. The equations obtained were accurate but rather cumbersome. The conformal mapping approach was then useful to develop local approximations, or asymptotic maps, of the flow solution both very close and very far from the moving meniscus.

Self-coalescence revealed several unique flow properties. First, even though the fluid propagates in the direction of the channel, it locally fills the gap perpendicularly to the direction of motion of the meniscus. Secondly, the local velocity of the fluid increased linearly, peaked, and decreased exponentially to zero both with time after the meniscus has passed and with distance from the meniscus. All of that within milliseconds after the reagents have been wetted. These properties somehow reminded us of the motion of a zipper fastener, where the zippers teeth are brought together perpendicularly to the motion of the zipper head and come to a rest immediately after the zipper has passed.

The zipper motion analogy explains why reagents reconstituted using self-coalescence do not accumulate or disperse in a channel: Taylor-Aris dispersion is minimized upon reconstitution. Taylor-Aris dispersion describes the inherent “smearing” of reagent plugs in a fluid due to the parabolic nature of flow profiles in viscous flows well known to microfluidicists and brilliantly characterized by G. I. Taylor and R. Aris in a landmark paper from the 1950s. It is impossible to counter as soon as a single phase fluid is set in motion and its magnitude roughly depends on the square of the flow velocity. The only way to prevent it is to rapidly bring the fluid to a halt, which is what self-coalescence effectively does.

Of course, while similar, there are several differences between SC and STVF. First of all, SC is induced by a pinning along a capillary line and has very well-defined contact angles making the flow different at the meniscus tip. Secondly, due to the capillary pinning, SC enables the generation of “finger” shapes that would not be physically possible in the classical phenomenon. Finally, and more importantly from an application perspective, there would be no way to reconstitute reagents inside a receding STVF, as one would need to spot after the fluid phase is introduced.

Once reagents are reconstituted in a well-defined line inside a Self-Coalescence Module (SCM), they can be sent to another SCM containing reagents for a second reaction step, or to a “detection zone”, a point downstream in the channel where a measurement would be made (via surface-based capture, optical readout, electrochemistry, etc.). Since we have a single-phase flow in a regular channel during this transit, Taylor dispersion is now unavoidable. However, it can be minimized over a distance if reagent plugs need to be separated or maximized if they need to be mixed together. Taylor-Dispersion in a straight channel of constant cross-section can be exactly modeled using Green’s functions, which yield a powerful design tool to “shape” the amplitude of dried reagent concentration profiles. This way, we demonstrated that the basic operations of microfluidics: sending reagent plugs, mixing, and gradient generation, could all be accomplished automatically with a SCM (see image below). Pulse shaping of light is a domain of its own in optics. We have now something analogous for chemical pulse shaping in a dispersive fluidic medium. 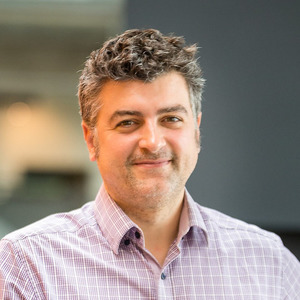 What is in that vesicle?
Contributor Nature Methods
Behind the Paper