Fiber photometry with tapered fibers allows monitoring of neural activity in larger volumes than with flat-cleaved fibers. In addition, signals from different depths can be resolved with the same tapered fiber.

Novel tools that circumvent experimental barriers have often driven the advancement of scientific knowledge. Over the past few years, this paradigm has clearly emerged in neuroscience. The development of light-activated genetically encoded indicators of neural activity, together with experimental methods for functional imaging in freely moving animals, has helped shining light on complex neural dynamics.

Back in 1999 Francis H.C. Crick asserted that «one of the next requirements» - to improve the ability to spatially localize signals recorded during physiology experiments with cell specificity - «is to be able to turn the firing of one or more types of neuron on and off in the alert animal in a rapid manner. The ideal signal would be light […]. This seems rather farfetched but it is conceivable that molecular biologist could engineer a particular cell type to be sensitive to light in this way»1. At the beginning of the third millennium, optogenetics - «the branch of biotechnology which combines genetic engineering with optics to observe and control the function of genetically targeted group of cells with light»2-started to gain popularity among neuroscientists.

In the last 20 years, optogenetic methods have been developed and refined, and the investigation of the neural bases of animal behavior has benefited from the application of optical modulation of neural activity and in vivo functional imaging of calcium dynamics. Taking advantage of unprecedented genetic targeting capabilities of specific cells, these techniques enabled all-optical approaches, using strategies as simple as a fiber optic to deliver and collect light, or as complex as holographic multi-photon microscopes, better if in “head-stage” size.

However, while these technologies are optimal to interface with limited volumes of tissue, scattering and absorption effects prevent them from interfacing with multiple functional regions of the brain. To solve this challenge, we resorted to modal properties of light propagation in optical fibers, in particular tapered optical fibers.

Light travelling in optical fibers is organized in modes, arrangements of the electro-magnetic field that satisfy the propagation conditions. Modes are ordered according to their transverse propagation constant, in short kt.

In common cylindrical fiber optics, low-order modes have a small kt and carry most of the energy that can be found near the fiber axis. High-order modes, instead, have a higher kt and transport most of the energy lying closer to the core-cladding interface. The maximum kt a fiber can sustain depends on its Numerical Aperture (NA) and its core size. In a tapered fiber, higher-order modes start losing energy in the surrounding medium at larger diameters than lower-order modes. Therefore, the exchange of energy at different taper section is mediated by modes with different kt. In other words, harnessing the light modes travelling in a tapered fiber gives access to different spatial locations along the taper.

Example of multipoint illumination of brain tissue (­­left) and examples of the light fields collected from a traditiona­­l flat cleaved fiber optic (center) and a tapered optical fiber (right). The multipoint illumination image is a merge of two fluorescence images displaying independently illuminated regions (light blue and magenta). Light collection fields are obtained by merging a standard two-photon epifluorescence image (magenta) with the image that is generated when light is collected through the fibers (cyan).

In our paper “Depth-resolved fiber photometry with a single tapered optical fiber implant”, we demonstrate that a single probe can deliver and collect light uniformly from regions up to 2 mm deep. At the same time, the probe can separate the functional contribution of multiple brain regions by segregating the propagating modes that interacts with a confined region of tissue. This led us to the first simultaneous monitoring of dopamine transients in two regions of the striatum, confirming that ventral dopamine transients are tightly linked to reward while dorsal ones are more closely related to movement. Notably, these experiments were performed with off-the-shelf optical components.

We wish our research will provide fellow scientists with an approachable yet highly innovative tool to optically manipulate and monitor multiple brain regions of a freely behaving animal simultaneously. We imagine that this approach is particularly valuable in this era where there is a wave of new optical sensors for different neurotransmitters, which will complement the advancement of in-vivo electrophysiology techniques. Moreover, we hope that the larger amount of information extracted by tapered fibers will help refining behavioral experiments, so to reduce the number of animals involved. 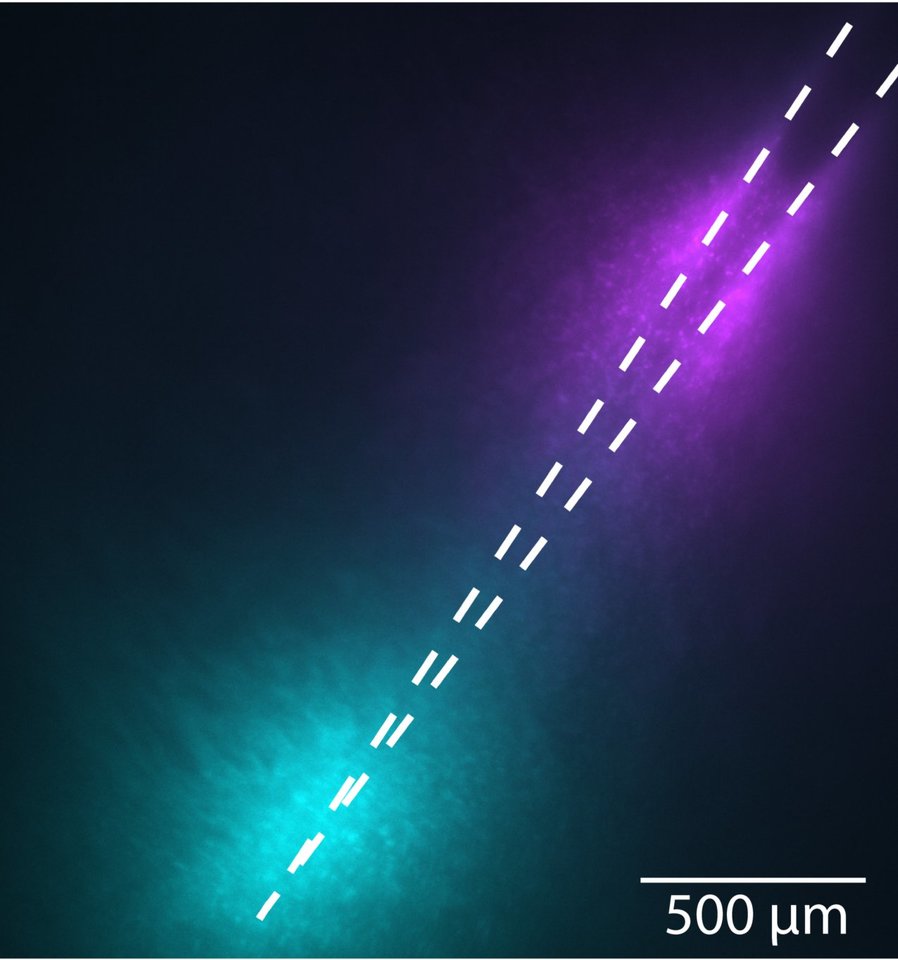