My three days at the European Symposium on Biological and Organic Chemistry (ESBOC) did not start in the most auspicious way. Or, again, maybe they did. Well, Friday the 17th, the day of my departure, is a day of bad luck in Italy, much like Friday 13th is in many other countries (it may not sound like it given my name, but I am indeed Italian), and my stopover at Birmingham New Street station to catch my connection to Newtown (Powys), Wales, certainly got my heart pumping.

To make a long story short, my apparently comfortable fifteen-minute leeway between my arrival from London Euston and my departure to (seemingly unknown in Birmingham) Newtown got eaten away by a mostly fruitless search for ‘my’ platform in a station, which, I later found out, is undergoing significant redevelopment — and is not very passenger-friendly. After a few minutes’ queue to reach the information desk, I got sent by the guy behind it to “platform 5b”, when I probably had something like seven minutes left to spare. After about five minutes of frantic soul-searching while pacing on a platform that just didn’t seem right, and that was at once platform 5, platform 5a and platform 5b, I grabbed my trusty trolley by the neck, ran up the stairs to the main concourse, then to the closest display panel, and finally down the stairs to platform 6b, as a train moved slowly past it. Was it my train? Was it pulling in? Was it pulling out? Well, suffice to say that, much to my relief, I made it to Newtown on time to catch the minibus meant to take all ESBOC participants arriving by train to the conference venue at Gregynog, a relatively isolated location about 8 km of narrow, windy road away from the town. 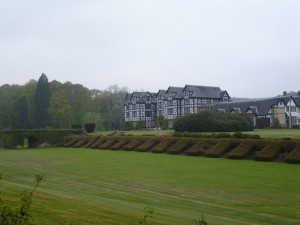 Gregynog… It is actually a beautiful country house surrounded by 750 acres of (beautiful, it behooves to stress) gardens and woods sitting right in the middle of Wales. It was donated to the University of Wales in 1960 by its owner, the late Miss Margaret Davies, as an arts center. As I started looking for my room, a friendly and slightly surprised member of staff exclaimed, “Room G2? It’s one of our two best rooms sir!” Wow, time to let my hair down, if I hadn’t just had it cut rather short, that is. The room was actually very nice and comfy, and I had something like half an hour to unpack before the conference reception and presentation.

This year’s annual conference was the 47th of the series, as this symposium was first organized here at Gregynog in 1967 by Professor Cedric Hassall of University College, Swansea. At the time, it was called Gregynog Natural Products Symposium, a name changed to European Symposium In Bio-Organic Chemistry in 1971, to become the present-day European Symposium on Biological and Organic Chemistry only in 2011. This year’s chair, Professor Kai Johnsson of EPFL Lausanne, Switzerland, could actually not be present, as his wife is expecting a baby imminently, so the role of hosts was entrusted to the capable hands of the Chairman of the Steering Committee, Professor Tim Bugg of the University of Warwick, and of the Treasurer and Secretary, Dr. James Redman of Cardiff University. 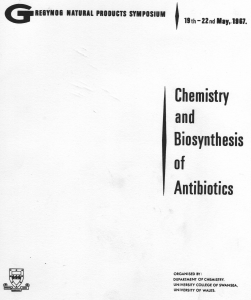 Cover of the program of the 1967 Gregynog Natural Products Symposium.Courtesy of Dr. James Redman.

The title of this year’s symposium was “Chemical Probes for Cellular Processes”, a subject that elicited an excellent response of corporate and non-corporate sponsors and, according to Professor Bugg, the most international attendance of the symposium to date. This year’s ESBOC had 60 participants from eight different countries affiliated to both academic institutions and industry. The program included 18 lectures by invited speakers, ten of them plenary and two ‘named’, and it also included a 12-strong poster session. Among the scheduled speakers were Nature Protocols’s own authors Ben Cravatt of the Scripps Research Institute, Edward Tate of Imperial College London, and Carsten Schultz of EMBL Heidelberg. All the talks, which included lectures by ‘industry’ speakers Dr. Ivan Correa of New England Biolabs and Dr. Keith Wood of Promega, were up my alley, so to speak, as they were generally given by chemists who applied their skills to attempt to answer biological questions, exactly my research background. 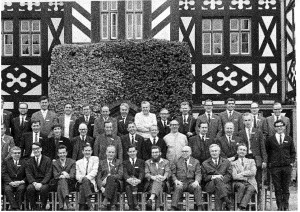 Participants of the 1969 Gregynog Natural Products Symposium. Cedric Hassall is the second person on the left seated. Courtesy of Professor Timothy Bugg.

It wasn’t just that I understood the talks in their entirety, which is undoubtedly a big plus, but I actually really enjoyed them. The symposium was small enough that no talks needed to be scheduled at the same time, so I was able to attend all of them. The lectures spanned subjects like applying bioluminescence to the study of intracellular interactions or the imaging of fatty acids, activity-based protein profiling, phage selection of peptides with different bio-relevant properties, the synthesis of riboswitches to control gene expression, the expansion of the SNAP-tag tool box, and fluorescence-based approaches to investigate nucleic acid structure. Talking about activity-based protein profiling, unfortunately Professor Ben Cravatt, who was supposed to give the first day’s Royal Society of Chemistry Bio-Organic Group Lecture entitled “Activity-based proteomics: applications for enzyme and inhibitor discovery”, could not be present, due to a family commitment, but he was replaced by post-doc Ken Hsu from his lab, who, despite the short notice and an 8-hour jetlag — Scripps is in San Diego, California — gave a wonderful talk on the use of activity-based protein profiling on serine hydrolases for the discovery of bioactive lipid networks by chemoproteomics and metabolomics.

The next day’s ‘marquee’ talk, the Cedric Hassall Lecture (“In vivo selective optical imaging of tiny tumors to rationally designed activatable fuorescence probes”), was to be given instead by Professor Yasutero Urano, of the University of Tokyo. Except that Yasutero was not the speaker’s first name. As he initiated his talk, Professor Urano pointed out that his name is actually YasuterU, and went on to speculate that the tendency of his European colleagues to spell it with an “O” must be due to an understandable mental association between himself and Elvis CostellO. Well, to be honest, I did not see much of a physical resemblance between Professor Urano and Elvis Costello, not least because the former is obviously much younger. The association was made clearer, however, by the thunderous applause that greeted the end of Urano’s lecture. A really impressive talk, even for an outsider like myself.

Professor Urano had described his laboratory’s work on synthesizing and testing probes that become fluorescent only when taken up by tumor cells, a strategy that would prospectively enhance surgeons’ ability to literally see cancerous tissues when operating. Urano’s research group had used two main approaches to achieve their goal. In one, pH-sensitive fluorescent probes are fused to an antibody specific to membrane receptors that are highly expressed on the surface of tumor cells. Upon endocytosis, the low-pH environment of the cell lysosome causes activation of the probe, which thus becomes fluorescent. In the second, the probe is fluorescently inactive as long as it remains bound to an appended peptide group, which can however be cleaved by GGT, a peptidase highly expressed on the surface of tumor cells. Upon cleavage of the peptide bond, the newly fluorescent and highly hydrophobic probe concentrates first on the cell membrane, and, eventually, inside the cell, to highlight that cell’s unhealthy state. What did I say? Really impressive.

As ESBOC drew towards its end, I even found out how Gregynog is pronounced correctly. Two competing schools of thought seemed to take shape on the matter at the conference. According to participants with Welsh connections, the pronunciation in southern Wales would be something like Greg-EYE-nog, whereas people in northern Wales may actually pronounce it Greg-E-nog. Unfortunately Gregynog is almost in the dead center of Wales… Mystery solved on Saturday night, however, when we ESBOC participants were entertained by the charming music of Welsh harp player and folk singer Siân James, clearly a reliable source on all things Welsh. To my untrained ear, she pronounced the locale “Greg-e-nog”, making a slight clicking sound with her tongue when she uttered the second and third g’s of the word.

What can I say? My experience at ESBOC was excellent all around. The place was fantastic, the talks outstanding, the participants friendly and chatty, and my ‘contacts’, Professor Bugg and Dr. Redman, always helpful. Even the food was terrific. Word on the street was that Gregynog had recently hired a new German chef, and everyone was raving about him. Ok, I am Italian, but I have to admit that he really knew his stuff. On Sunday the weather too smiled on us, with a gloriously sunny day; too bad that we were about to leave and that strolling around the grounds had been scheduled for the day before. Oh well, not bad for a conference two train and one minibus ride away that started on a Friday the seventeenth…

Well, the last bit of important information concerns next year’s ESBOC at Gregynog: ESBOC 2014 will take place on 16–18 May, and it will be organized by next year’s scientific chair, Dr. José Luis Mascareñas of the Universidade de Santiago de Compostela, in Spain. The title of that conference will be “Biological Applications of Supramolecular Chemistry”. Make time to go, if you can.