It’s hard to believe that five years have gone by since Veronique Kiermer, Nicole Rusk and myself saw the first issue of Nature Methods go out the door. In some ways it doesn’t feel like it was that long ago while in others it feels like much, much longer. But it has certainly been a rewarding and stimulating five years and we are thrilled with the success that Nature Methods has enjoyed.

To help celebrate, Veronique asked a local pastry shop run her friend called “”http://www.howsweetitispastry.com">How Sweet It Is" to bake a cake using the cover image of our inaugural issue. It turned out spectacularly and tasted just as good. I’m hoping to convince Veronique to post a blog entry describing the undertaking with accompanying pictures.

While our readers won’t be able to taste the cake, they can see a picture of it in its full glory (minus a slice) on the cover of the October issue. Below, I have pasted an image of the October 2009 cover next to an image of our October 2004 cover so you can see how well the artisans recreated our first cover. 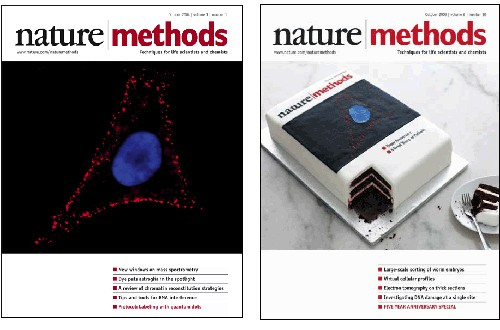 Our readers can however, enjoy a special selection of content in our special anniversary issue. Science Historians Angela Creager and Hannah Landecker provide fascinating Historical Commentaries on the roles methods have played in 20th Century biological science. We are also indebted to Steven Shapin for his help in pointing us to these two people, without whom the issue wouldn’t be as special as it is.

Of course we must also thank the practicing scientists who wrote the scientific commentaries on a selection of methodological topics that have appeared in Nature Methods over its first five years. While we would have liked to include more topics, this limited selection illustrates quite well how Nature Methods has participated in conveying important methodological developments to our readers. For a full description of the special commentaries in the issue please see the editorial.

Finally, we would like to thank all our authors, reviewers and readers for their support over the years. We hope everyone enjoys this special issue and we look forward to another five years of communicating methodological advances.