Vivien Marx reports from the AACR meeting and Rally for Medical Research in Washington, with details of the AACR plenary address by Harold Varmus.

Leaving the talks and conference halls behind, around 8,000 researchers and clinicians attending the American Association of Cancer Research (AACR) in Washington, DC joined patients and patient advocates on the Carnegie Library grounds to rally against cuts to research budgets. Members of Congress, patient advocates and celebrities involved in the organization Stand Up to Cancer, which also funds research, made their loud and forceful case against sequestration, the impending across-the-board forced 5% budget cuts facing government agencies, including the US National Institutes of Health.

Rally participant, University of Wisconsin scientist Nihal Ahmad, says that the sequester is already hitting his research, cutting into his ability to buy tools and reagents, which is work on signal transduction in tumors.

Overcoming cancer is a “very significant outcome for this country,” says Daniel Pollay of Weill Cornell Medical Center, explaining why he attended the rally. Andrea Russello, a product scientist at Cell Signaling Technology took part in the rally because her customers include academic scientists whose work is being affected by the sequester. She also knows many young scientists who cannot find jobs after their post-doctoral fellowships. The risk now is not just a budget plateau. “I think we’ll really regress if we can’t keep pushing forward,” she says.

Columbia University Medical Center researcher Jeanine D’Armiento looks at matrix metalloproteinases in tumors, in lung diseases in particular. Her latest grant scored in the 9th percentile. “Last year funding was at 10% and now it’s at 6%, if it were last year I would have received that grant. But right now, I don’t have it.” Staff cuts have been inevitable and she feels that her dream to move from mouse models into humans has to be put indefinitely on hold. According to NIH rules, the grant can only be resubmitted after 36 months. 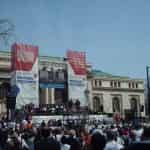 Rally at the Carnegie Library 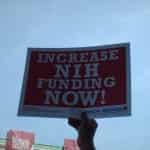 A call with an exclamation mark 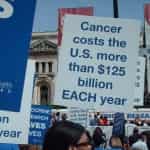 The cost of cancer 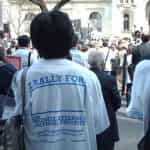 Wearing what you want

Prior to the rally, National Cancer Institute Director Harold Varmus in his AACR plenary address encouraged delegates to attend it in order to highlight the importance of doing science to counter illness. The new BRAIN Initiative proposed by President Obama, may bode well for the future of science, he says, but it is an initiative that will “come too late” to address the problems cancer researchers face this fiscal year and the near future, he says.

Instead of just a fall over a fiscal cliff, research funding has actually been declining since 2003, he says. Inflation has eroded the agency’s spending ability to 2001 levels.

At the same time, he feels optimism about the new inroads against cancer that researchers are making and the possibilities the current $4.8 billion dollar budget provides. To manage the sequestration, his agency will keep the number of funding grants constant this year with a grant-funding success rate around 13%-14%.