High-content screening: Our tech feature and the GE image competition

In single cell experiments, each well in a 384-well plate can spout a fountain of information. Chris Bakal at the Institute of Cancer Research, which is part of the University of London, practices “high content in high throughput” as he extracts hundreds of different features from single cells in his lab. In this month’s technology feature on single cell analysis, Bakal explains where his work leads and what he looks for in an imaging system.

In the past, drug discovery has driven high-content analysis but that trend is shifting. High content screening instruments are now increasingly finding homes in academic labs.

For example, the IN Cell Analyzer from GE Healthcare Life Sciences is also used at the University of Texas MD Anderson Cancer Center’s department of experimental Therapeutics. Geoffrey Grandjean, who was interviewed in this month’s technology feature, helped to set up a core facility service there, performing high-throughput, high-content siRNA screening. Seeing the images on a regular basis motivated him to start graduate school in experimental therapeutics.

Grandjean co-authored a paper in Cancer Research that looked at resistance to anti-mitotic chemotherapy agents and documented several gene clusters influencing reaction to the chemotherapy drug in “strikingly different ways.” The team also found that modulating microtubule stability in cancer cells is a way to enhance paclitaxel cytotoxicity. The team used siRNA to look at genetic factors regulating microtubule stability when ovarian cancer cells are treated with the drug paclitaxel. 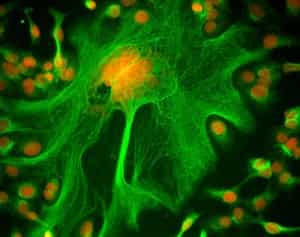 One of Grandjean’s images won last year’s IN Cell Analyzer Image Competition. A cancer drug makes the cellular scaffold so rigid that the cell cannot divide, thus resulting in a huge cell that dwarfs those around it.

Voting for GE Healthcare’s 2012 cell imaging competition has opened in two categories: microscopy and high-content analysis. You can cast your vote by December 19th. Winners will have their images displayed in New York City’s Times Square.